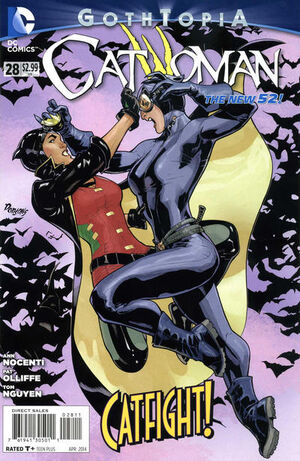 I can taste your fear. I'm a connoisseur of fear. What are you afraid of? What's the matter Catwoman? Are you scared of who you really are?

Appearing in "The Way of the Cat"Edit

Synopsis for "The Way of the Cat"Edit

Gotham City is famous for its crime, at least outside of the mass delusion that the city has recently fallen into, it is. Now, even the city's heroes are blind to the crime that continues among those who shook off that delusion.

Among those heroes is Selina Kyle, who has been manning the phone lines at a suicide help center, given that despite the decrease in crime, suicides are up. Turning to one of her coworkers, she wonders how all of the callers they've been getting could be living under a delusion that their lives are terrible, when their lives so clearly aren't. The woman supposes that when someone has convinced themselves they have a good life, they create false memories to support the lie of happiness. They have both seen how people who experience these brief delusions soon return to real life as if nothing has happened. On the other hand, neither of them is sure that the delusion isn't the other way around - that they are the ones who are deluded.

Soon, Selina has a one-on-one meeting with a suicidal man. He explains that after he spent a decade in prison waiting for someone to kill him at any moment, he developed a sixth sense for things being off. He no longer trusts his own thoughts. He had never felt happy in his life until just a few days ago - and that felt wrong. He doesn't trust her either. When they first started talking, he offered her a cigarette and she took it, but she obviously doesn't smoke. She holds the cigarette like she hates the habit. She's just as deluded as everyone else.

As she walks home, Selina witnesses a purse-snatching in broad daylight, right in front of a cop. Horrified, she chases the thief down, and demands to know how he could make such a brazen act. He responds that if she saw him do it, she must know that something is wrong with the world. She wonders how he could have avoided the delusion as well, and he believes it might be the drugs he's on.

The night before, Catwoman had encountered a criminal called Steeljacket who had told her to look closer, so she has decided to look closer at him. She discovered that his real name is Gunther Nash, and soon located his address. She learns from papers on his desk that he did two tours of duty with the Air Force, but was shot down and incurred a spinal injury which he was told would deprive him of his ability to walk forever. Obviously, that was not the case, as he now stands in front of her with a shotgun trained on her head. Swatting it aside, she grabs him up by the neck, marvelling at how light his body is. He explains that the doctors hollowed out his bones so that he could walk again, but the exoskeleton that she damaged the other night is necessary for his survival. He had asked her earlier to perform a heist for him, but she had beat him up instead. She wonders what he'd do with that money, and he responds that he'd fix his body, even at the cost of never being able to fly in his exoskeleton again. Moved, Catwoman asks him to meet her that night at the Gotham Zoo.

Afterwards, Catwoman crashes a fancy dinner party, attacking the aristocratic patrons and stealing their valuables. Unfortunately, she is caught on camera, providing the Gotham Peace Department their first real case in weeks. Carlos Alvarez suggests that they go to the Mayor to pull in the big guns, like Catbird.

Bored by the lack of police attention she's getting, Catwoman patrols the city until she spots an intended bride toeing the edge of a building's roof, planning to jump as her groom begs her to come back. She claims that she has no memory of falling in love with him, and their wedding seems very sudden. As a result, she can't be sure who she is anymore, and steps over the edge. Fortunately, Catwoman intervenes, swinging down and catching her in mid-air, returning her to her wedding. The woman seems pleased by the rescue, shaking off her doubts. The act of rescuing the woman seems to do the same to Selina, whom Bluebelle, who was watching nearby, addresses as Catbird. She warns Selina that there was a high alert for a woman dressed as a black cat committing vicious crimes. Outraged, Catbird determines to put a stop to her own crime spree.

That night, Selina returns to her apartment and is confused by what she finds there. Evidence of two lives sends her senses reeling. Trying to remember who she is, she settles on Catwoman, and heads to the Zoo, releasing a pair of panthers. Accompanied by Steeljacket, they interrupt a charity event to rob its patrons. Naturally, this doesn't go unnoticed by Gotham's protectors, who are brutal in their beating Catwoman. Seeing that she will lose this fight, Steeljacket sweeps her up in his metal wings, carries her away, and drops her in the river.

Trudging ashore, Selina is disgusted by how easily she fell to the delusion of happiness, and decides that it can never happen again. On the other hand, she's not really happy as Catwoman either. She rejects Steeljacket's offer for another heist, and he senses her fear, wondering if she's afraid of discovering who she really is, between Catwoman, Catbird, and Selina Kyle.

That night, Selina returns to her apartment, and shreds the cat-suit, deciding instead to embrace her new job and never be Catwoman again.

Retrieved from "https://heykidscomics.fandom.com/wiki/Catwoman_Vol_4_28?oldid=1418084"
Community content is available under CC-BY-SA unless otherwise noted.