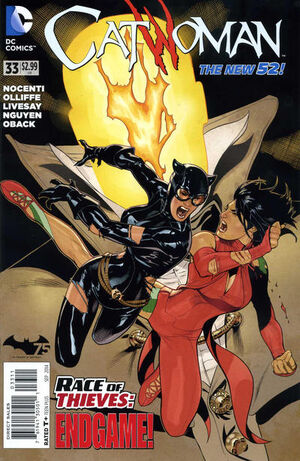 Sweet. Let her relax. Enjoy her win. Then we'll yank the rug out.

Appearing in "Race of Thieves, Part 4: A Cold Case"Edit

Synopsis for "Race of Thieves, Part 4: A Cold Case"Edit

Though she expected it, Catwoman is angry that Roulette fixed the Race of Thieves, and she intends to find her and make her pay. Her friend Alice Tesla hit dead ends following the Sinclair name to casinos and fight clubs around the world. However, she has been thinking about the gaslights that Roulette had used at her initial party, and she believes that Roulette was gaslighting Catwoman; gaining her trust and confusing her perception of what is real. Catwoman supposes that if Roulette thinks she's successfully manipulated her, then it might serve her to pretend that she did.

Later, Selina meets with Eddy Gillbrite to get some closure on a cold case she's been working. The officer explains that Victoria Viceroy had left all of her money to a servant, and nothing to her children. He believes that this servant fathered her child. She must have suspected that one of her natural children might try to take revenge on the child. He confirms the coroner's report that Victoria had been poisoned with arsenic by her own daughter before being shot. The gun that had shot her was her son's, though she was already dead when he did it. As far as Victoria's descendent Rita, Gillbrite thinks he failed her. He didn't manage to clear her family's name at all. He did, however, manage to pull a partial print of Victoria's from the child's clay death mask that Selina brought him from Hunt Stone's mansion.

That night, Catwoman pays a visit to Hunt Stone, whom she finds burning the evidence he had paid Gillbrite to retrieve for him. When he spots her, he admits that he used her, and shows no remorse. He had read her, and he could tell she'd fall for his child hostage ploy. Swatting the gun from his hand, she goes over the scenario, explaining how he worried that the archaeological dig at the old Viceroy mansion would reveal that his ancestors gained their fortune by murdering Victoria viceroy. He had assumed that the man had murdered her after she'd changed her will in his favour. He admits it readily, explaining how he met Roulette at one of her casinos, and it was she who convinced him to use thieves like Catwoman to do his dirty work for him by stealing the evidence. If Catwoman had arrived minutes earlier, she would have caught him before he burned the evidence. She responds that she had been watching for some time already. He had burned the evidence that would have exonerated his ancestor, considering that it was Viceroy's daughter who poisoned her to death. Hunt Stone is the rightful heir of the viceroy fortune. He had nothing to fear from the crime scene. As a result, Rita Viceroy can now make a claim as the rightful heir. In exchange for her silence, Catwoman demands Roulette.

From Stone, Catwoman learns that Roulette is obsessive compulsive. Every element of her day is rigidly arranged according to her desires. Together with Tesla, she goes through the woman's strict schedule and plans ways to sabotage her day.

The next day, an extra ten pounds on Roulette's weight machine throws her off her game. When she swims laps in her pool, a device attacks her in the water, and then disappears before anyone else can see what happened. In her elevator, Roulette demands that her assistant get her a new weight machine, and file a lawsuit against her pool manufacturer. As the elevator goes down, Catwoman attaches a tow cable to the top of the car, preventing it from progressing further, and causing a lurch that drops both passengers to the floor. Angrily, she tells her assistant to sue the building too.

Trying to get a grip, Roulette prepares for her meeting with a prominent casino owner while Catwoman secretly replaces her driver. When Roulette demands that she get her to the meeting quickly, Catwoman speeds violently into a street lamp. When Roulette angrily turns to fire the driver, she finds nobody behind the wheel. When she arrives at the meeting, the casino owner reacts with disgust to the thugs she brought - only she didn't bring any thugs. Someone else did. She fights the thugs off, proving that they're not hers, but the last attacker she must face is Catwoman. Grinning, Catwoman pins her and warns that unless Roulette wants every day of her life to be like this one, she'd best agree that Catwoman has won.

Later, Selina places her dossier on the criminals she encountered during the Race of Thieves into her secret vault, taking account of who she owes, and who owes her. She has won the game - but in the end, it hasn't got her much. As a reminder, she writes on a note, "Don't get cold," and places it into the vault as well.

Retrieved from "https://heykidscomics.fandom.com/wiki/Catwoman_Vol_4_33?oldid=1418089"
Community content is available under CC-BY-SA unless otherwise noted.