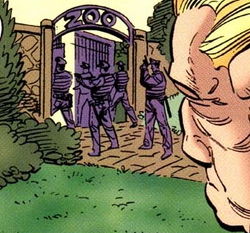 Pursued by the Scarlet Spider and Strongarm, the Lizard sought refuge in the Central Park Zoo, where it released many wild animals before being eventually caught and delivered to the police.[1]

After arranging a meeting with Jason Tso at the Central Park children's zoo, Doctor Octopus sent Aura, Override and Looter to redeem themselves, although all three were defeated by the Scarlet Spider and Jason Tso's Cyber-Slayers.[2]

A short time later, the Wendigo was defeated and capture here by Spider-Man and the Ghost Rider.[3]

Some time later, as a result as Kraven's resurrection, the animals in the Central Park Zoo freed themselvers and began stalking the streets of New York City.[4]

Meyer transported Spider-Man, Jonas and Tamara Fleet to the Wendigo.[3]

Retrieved from "https://heykidscomics.fandom.com/wiki/Central_Park_Zoo?oldid=1511174"
Community content is available under CC-BY-SA unless otherwise noted.