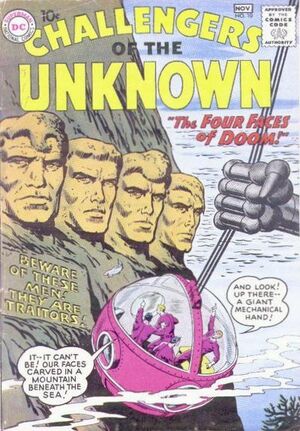 Appearing in "The Cave-Man Beast"Edit

Synopsis for "The Cave-Man Beast"Edit

While out looking for Dr. Manning, a missing scientist, June discovers a giant cave-man, who captures her and goes on a rampage. Learning of the creature the Challengers try to trap it. However, when they come across some of Dr. Manning's formulas, June convinces the giant creature to drink one of the formulas and it surprisingly reverts to Dr. Manning.

Appearing in "The Four Faces of Doom"Edit

Synopsis for "The Four Faces of Doom"Edit

While exploring ancient ruins that the Challengers visited a year prior, the group find themselves transported to another era where to their surprise the aided and failed in helping a rebellion the year prior. The Challengers then team up with the rebel leader X-2 and save the kingdom from it's tyranical leader before being returned home.

Retrieved from "https://heykidscomics.fandom.com/wiki/Challengers_of_the_Unknown_Vol_1_10?oldid=1418129"
Community content is available under CC-BY-SA unless otherwise noted.