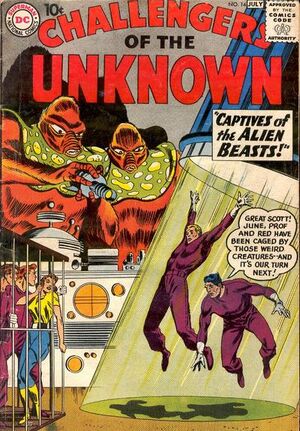 He's become a sort of Multi-Man... many men in one!

Appearing in "The Man Who Conquered the Challengers"Edit

Synopsis for "The Man Who Conquered the Challengers"Edit

When invited to view an expedition of the Island of Ruins, the Challengers are told of a secret formula that will grant a being immortality of a sort -- granted with a super power, every time the empowered being would die they would be reborn with a new ability. The formula is stolen by a crook who drinks it and becomes Multi-Man.

Pursued by the Challengers, each time he is about to be captured, Multi-Man kills himself to commit a new crime with a new power. Finally, while Multi-Man gains flying powers, Ace manages to douse him with the antidote chaning Multi-Man back to normal, and he is promptly arrested.

Appearing in "Captive of the Alien Beasts"Edit

Synopsis for "Captive of the Alien Beasts"Edit

While returning home from a mission, the Challengers and June Robbins are captured by giant alien beasts from another planet and taken prisoner. Escaping the get the aid of other captive aliens in defeating their captors before using their teleportation ray to return home.

Retrieved from "https://heykidscomics.fandom.com/wiki/Challengers_of_the_Unknown_Vol_1_14?oldid=1418133"
Community content is available under CC-BY-SA unless otherwise noted.