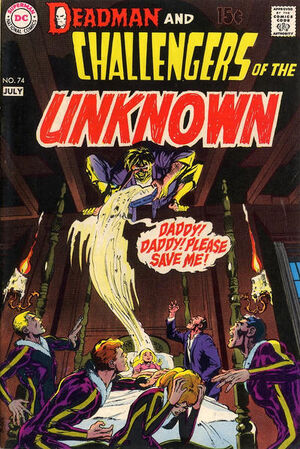 Appearing in "To Call a Deadman"Edit

Synopsis for "To Call a Deadman"Edit

Seth Gross, a wicked magician, befriends Vashnu, learns the secret of astral projection, and steals from him a mystic box with the power to trap a soul. He goes into ghost-form and uses the box on the daughter of scientist McJames, forcing him to attempt jewel robberies in return for the soul of the little girl, who will remain in suspended animation for some time. Johnny Double and the Challengers of the Unknown become involved in the case, but it is Deadman who actually fights Gross, inhabits his spirit-form in a particularly painful process, and restores the little girl's soul to her body in time. At that, Deadman exits Gross's ectoplasmic form, with Gross driven insane by the experience and unable to return to his body.

Retrieved from "https://heykidscomics.fandom.com/wiki/Challengers_of_the_Unknown_Vol_1_74?oldid=1418193"
Community content is available under CC-BY-SA unless otherwise noted.