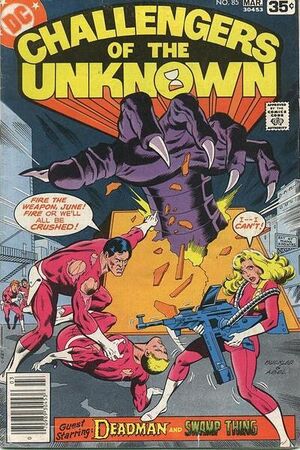 I have a feeling there's more to this mystery than we can guess... and it might just prove deadly!

Appearing in "The Creature from the End of Time!"Edit

Synopsis for "The Creature from the End of Time!"Edit

In Challengers Mountain, Red and Rocky begin fighting one another for the affection of June Robbins. Deadman and Swamp Thing are present and both use their powers in an effort to get the Challs to calm down. Red won't be silenced however, and angrily quits the team.

Soon after, Professor Haley calls the group together and tells them about a strange radioactive cube that suddenly appeared in Toronto. The cube is immovable, and any who come into close proximity to it begin suffering from radiation sickness. June, Rocky, Ace, Deadman and Swamp Thing board the Challenger SST and take off to investigate. Arriving in Canada, Deadman makes contact with the cube, and it suddenly hatches, produces a giant alien monster. The Challs disembark, and Deadman possesses June Robbins and has her fire a rocket gun at the beast. The blast severely weakens it and Swamp Thing finishes it off. They bring the creature back to Challengers Mountain where Professor Haley examines it.

Haley carbon dates the monster and determines that it came from Earth's far-distant future. He recommends consulting with time traveler Rip Hunter, but Rip hasn't been seen in over a decade. They take the SST to Hunter's mountain top time laboratory, only to find that it is occupied by another giant monster. They defeat the monster, and locate Rip Hunter's time sphere. Making adjustments, they attempt to use it to track the time traveler down. The group exits the time sphere in the year 12,000,000 AD. As they look around, they see Rip wearing a strange headpiece and declaring that they are now about to die.

Retrieved from "https://heykidscomics.fandom.com/wiki/Challengers_of_the_Unknown_Vol_1_85?oldid=1526867"
Community content is available under CC-BY-SA unless otherwise noted.