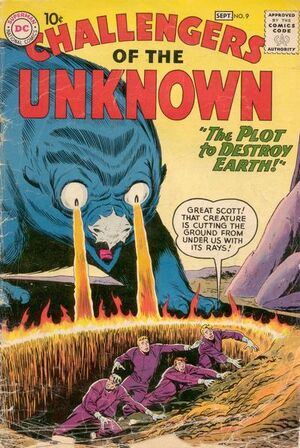 Appearing in "The Men Who Lost Their Memories"Edit

Synopsis for "The Men Who Lost Their Memories"Edit

Appearing in "The Plot to Destroy Earth"Edit

Synopsis for "The Plot to Destroy Earth"Edit

When a series of giant creatures attack the Earth, the Challengers learn that space ship full of robots intend on carving up the Earth and making use of it's many resources. Unable to stop the beasts with any weapons at their disposal, the Challengers then use trickery by creating fake inflatable monster which that appear to be the real thing. When the alien robots see the fakes "defeat" at the hands of the humans, they believe their invasion will fail and leave the Earth.

Retrieved from "https://heykidscomics.fandom.com/wiki/Challengers_of_the_Unknown_Vol_1_9?oldid=1418128"
Community content is available under CC-BY-SA unless otherwise noted.