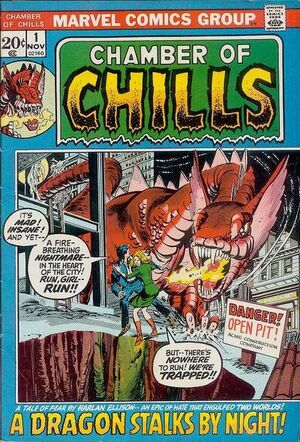 Appearing in "Moon of Madness, Moon of Fear"Edit

Synopsis for "Moon of Madness, Moon of Fear"Edit

A story about a were-man who runs with a pack of wolves and once a month turns into a wolf creature at the touch of the first rays of the sun to seek out human flesh.

Synopsis for "Delusion for a Dragon Slayer!"Edit

A man is killed by a wrecking ball and becomes aware that heaven is the realization of one's dreams, but one must have the proper character to achieve the goals. After the ball lands on him, he opens his eyes to find that he has become a heroic barbarian ship captain in a fantasy world so far from the mundane reality that he lived upon Earth. He attempts to lead his men that depend upon him through the waves, but fails to take into account the reef due to his vanity, and the men are lost at sea. As he washes ashore, he comes upon a beautiful woman who is guarded by a fearsome beast. Instead of challenging the beast in a fair fight, he cowardly stabs it in the back with his sword. The woman is terrified of him and backs away, but he cares nothing of her concern and takes her by force. A huge shadow descends upon him, and just before he is devoured by a dragon, he realizes he was never a good person but merely worshipped at an alter of quiet evil.

Retrieved from "https://heykidscomics.fandom.com/wiki/Chamber_of_Chills_Vol_3_1?oldid=1418494"
Community content is available under CC-BY-SA unless otherwise noted.