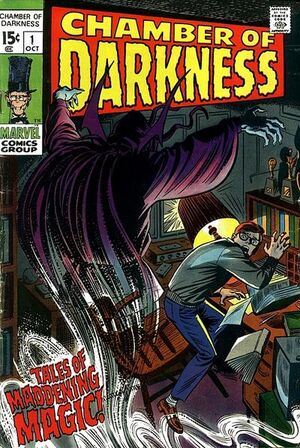 Appearing in "It's Only Magic!"Edit

Synopsis for "It's Only Magic!"Edit

A boy pockets a boy from an occult book store that contains spells to summon a djinn. When he reads the incantation, a djinn appears but is so malevolent that it tells the boy anything he wishes for, he will grant in a way to torment him. So if he wishes for eternal life, the djinn will grant him eternal life in the flaming pits of hell. If he wishes for riches, he will find himself entombed with them forever. Afterward, he will destroy the whole human race so that he will not be bothered again. If he wishes for nothing, he will destroy the boy outright. The boy thinks furiously and wishes for time to be turned backward. The djinn protests, but grants the wish, and this time the boy walks away from the occult bookstore instead of pocketing the book.

A man returns to a house where his grandfather performed unspeakable occult rites that gave the house an awareness and loathing of humanity. It forces him to retreat by gusts of air, slamming doors and broken timbers but he comes back with servicemen determined to master the possessed house. The house drives them off as well, despite the man's offer to raise their wages to refurbish the house. Refusing the let the house win, he pays a demolition crew to bring up a wrecking ball and level it, but after the first strike he tells them to stop. He knows one more blow will destroy it, and he can't go through with it. He tells the house the reason he wanted to move in was so that he could be more like his relatives instead of being unable to hurt an inanimate object, much less a living creature.

A man in the modern era hates to be laughed at so he intends to use a time machine to travel into the past. When he lands in a middle ages kingdom, the royal family find his attempts to convince them that he comes from the future so amusing they make him the court jester.

Retrieved from "https://heykidscomics.fandom.com/wiki/Chamber_of_Darkness_Vol_1_1?oldid=1419043"
Community content is available under CC-BY-SA unless otherwise noted.