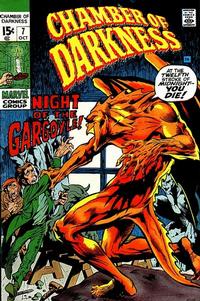 Just rest in bed, drink plenty of liquids, and gargoyle every night.

Appearing in "Gargoyle Every Night"Edit

Synopsis for "Gargoyle Every Night"Edit

Emil Vogel is an elderly sculptor whose work includes the crafting of gargoyles for a small European town. Vogel is haunted however by the visage of a statue in the middle of his work place, a large golden gargoyle. He chastises the inanimate "Golden Angel", claiming that its very existence torments him night after night. Vogel's work is interrupted by a knock at the door. A police constable and several towns folk are concerned about rumors they have heard concerning Vogel's nighttime activities. While Vogel is distracted with the constable, two thieves named Billy and Clive sneak into his studio and find the Golden Angel gargoyle. They fire up Vogel's smelting pot and begin to melt the statue so that they can transport the refined gold. When Vogel discovers what they have done, an astonishing change overtakes him. Vogel himself is actually an evil gargoyle and only the existence of the Golden Angel prevented him from assuming his true form. Vogel attacks Billy and Clive and dunks them into the vat of molten gold.

A crazed inventor creates a creature in a laboratory that he names Manaak. As Manaak comes to life, the inventor tells him that he is indestructible, immortal and virtually superior to every other human being on the face of the planet. Manaak responds to this by saying, "If I am truly all these things, then logic requires I ask you one simple question. Who needs you, 'master'?" With that, Manaak lunges towards his creator.


Appearing in the 4st StoryEdit

Synopsis for the 4st StoryEdit

Retrieved from "https://heykidscomics.fandom.com/wiki/Chamber_of_Darkness_Vol_1_7?oldid=1419049"
Community content is available under CC-BY-SA unless otherwise noted.