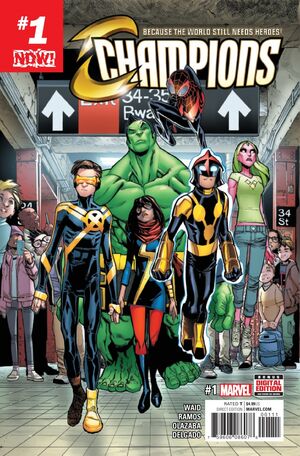 Following the fallout of CIVIL WAR II, Avengers Ms. Marvel, Nova and Spider-Man strike out on their own — joined by Cyclops, Viv Vision and the Totally Awesome Hulk! Six young heroes determined to change the world — and they’re only the beginning!

Retrieved from "https://heykidscomics.fandom.com/wiki/Champions_Vol_2_1?oldid=1652091"
Community content is available under CC-BY-SA unless otherwise noted.