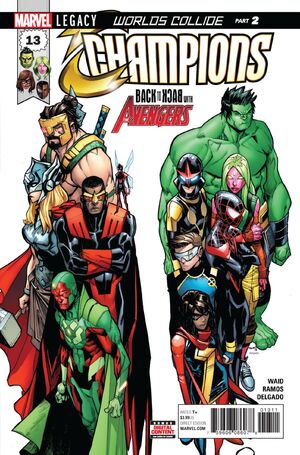 The titanic clash between the Champions and the Avengers continues! Since they were old enough to say the word “Avengers,” the Champions have idolized Earth’s Mightiest Heroes. Now the two teams are on equal footing — and the Champs must walk the walk alongside their former mentors! Will their experiences in GENERATIONS help them — or tear the two teams apart? PLUS: Includes 3 bonus MARVEL PRIMER PAGES! Story by Robbie Thompson and a TBA artist!

Retrieved from "https://heykidscomics.fandom.com/wiki/Champions_Vol_2_13?oldid=1652115"
Community content is available under CC-BY-SA unless otherwise noted.