Start a Wiki
Part of the 'Northern Lights' story arc 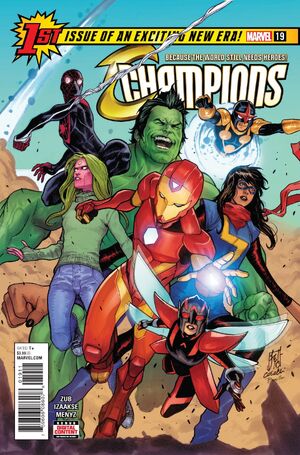 • IRONHEART and THE UNSTOPPABLE WASP join the Champions at last! The team has grown but the mission stays the same – the Champions fight to make the world a better place for all!

• Writer Jim Zub (AVENGERS: NO SURRENDER) and artist Sean Izaakse (UNCANNY AVENGERS) reunite to push the Champions beyond their limits with any icy Antarctic adventure that will challenge everything they believe in!

• Don’t miss this first chapter of a new era of Champions – and the birth of a brand new hero!

Retrieved from "https://heykidscomics.fandom.com/wiki/Champions_Vol_2_19?oldid=1652128"
Community content is available under CC-BY-SA unless otherwise noted.