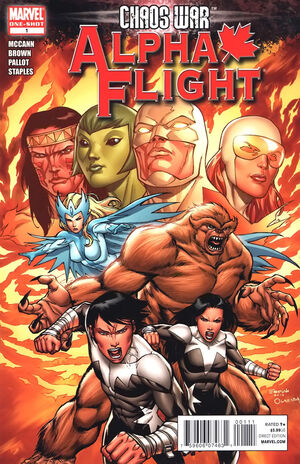 The Great Beasts used me, but they brought us all here for a reason. We're best when we're together. We can take down the Great Beasts, which means we have a chance against the Chaos King. They feared us, that's why they needed us to protect them. If we can join with the God Squad to help the fight... It's the Chaos King's turn to fear us. Live or die, we do it together. As Alpha Flight!

CHAOS WAR tie-in! ALPHA FLIGHT IS BACK! Original members Guardian, Vindicator, Shaman and Marina are back from the great beyond to join their team in battle larger than life or death! As CHAOS KING and his army cut a path of destruction across the Marvel Universe, the return of Alpha Flight may just be what the heroes need to turn the tide. So why does one team member want to put Alpha Flight back in the grave?

Retrieved from "https://heykidscomics.fandom.com/wiki/Chaos_War:_Alpha_Flight_Vol_1_1?oldid=1419079"
Community content is available under CC-BY-SA unless otherwise noted.