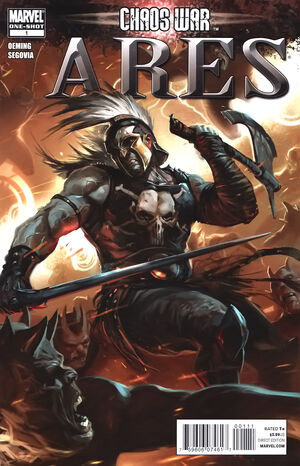 I thought I knew what hell was for a god of war. Now I fight for my enemy in a battle I am certain to win, with a victory that means utter defeat for us all. I am the general of a war that serves only chaos. And now I understand hell itself.

Ares is dead, torn in half at the hands of the Sentry. But what is worse than death for the God of War? Being enlisted into the army of the Chaos King! The Chaos War has its beginnings in Ares' first miniseries, now see their fates come full circle as the two greatest forces of destruction battle one last time for the soul of the Pantheons. Ares defeated the Chaos King once before, but now he is dead and armed only with his love for his lost son. How can he stop the living oblivion Chaos King has become, even with the help of Zeus and Hera? And at what price comes defeat?

Retrieved from "https://heykidscomics.fandom.com/wiki/Chaos_War:_Ares_Vol_1_1?oldid=1419080"
Community content is available under CC-BY-SA unless otherwise noted.