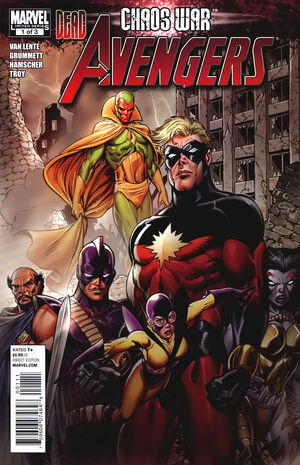 CHAOS WAR tie-in! The Vision. Captain Mar-Vell. Yellowjacket. Deathcry. Swordsman. Dr. Druid. All lost their lives in the line of duty...or in disgrace. When Earth's Mightiest Heroes are themselves laid low in the carnage of the CHAOS WAR and the graves give up their dead, these six find themselves mysteriously returned, to RE-ASSEMBLE against the CHAOS KING's most fearsome ally -- one of the Avengers' greatest foes! It's a final chance at redemption, a second life, and most importantly, to prove -- once and for all -- that they are worthy of the name... AVENGERS.

Retrieved from "https://heykidscomics.fandom.com/wiki/Chaos_War:_Dead_Avengers_Vol_1_1?oldid=1733207"
Community content is available under CC-BY-SA unless otherwise noted.