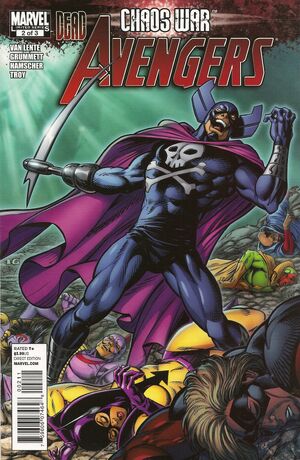 When I stole this Yellowjacket costume from Avengers Mansion back in the day, I planned to use its shrinking stuff only on myself. And for myself. But there was something about...that place. That group. It for me thinking I could be more. I went into space -- into the freaking future! I thought I had the chance to make something of myself. But I feel like...my life ended before I really could.

The newest, greatest and, in the carnage of the Chaos War, only team of Avengers around faces the threat that united them: the GRIM REAPER! Eric Williams has long been one of the Avengers' most fearsome foes, and now that he has fully pledged himself, heart and soul, to the Chaos King, he's looking to kill his arch-nemesis, the android Vision, and his allies -- Captain Mar-Vell, Yellowjacket, Dr. Druid, Deathcry and the Swordsman -- twice! And if they fall, every Avenger past and present will fall with them.

Retrieved from "https://heykidscomics.fandom.com/wiki/Chaos_War:_Dead_Avengers_Vol_1_2?oldid=1419083"
Community content is available under CC-BY-SA unless otherwise noted.