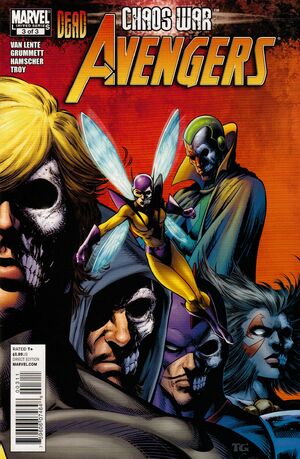 CHAOS WAR tie-in! This is it! The last stand of Earth’s Mightiest Fallen Heroes, the “late” Avengers against the combined might of Grim Reaper, Nekra, and the war machines of the Chaos King. They'll learn the hard way: EVEN THE DEAD CAN DIE! The Vision makes his last stab at humanity! Will Dr. Druid be seduced again by Nekra's charms? Will Captain Mar-Vell sacrifice all for his comrades? The Swordsman makes his final choice between heroism and villainy! All this and the most poignant ending of the year!

Retrieved from "https://heykidscomics.fandom.com/wiki/Chaos_War:_Dead_Avengers_Vol_1_3?oldid=1657698"
Community content is available under CC-BY-SA unless otherwise noted.