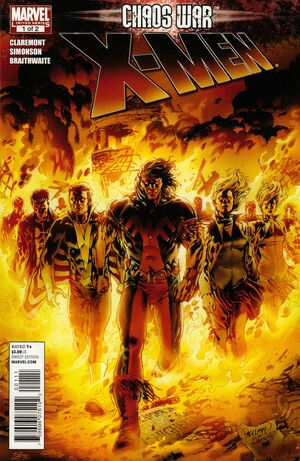 X-Men greats Chris Claremont and Louise Simonson join artist extraordinaire Doug Braithwaite in a special 2-issue CHAOS WAR tie-in. As the Marvel Universe is destroyed pantheon by pantheon by the dark god, Chaos King, the rift between the underworld and Earth is violently ripped apart. How can a handful of deceased X-Men make a difference in Chaos King's war against life? Get ready for the startling answer when the most unique team of mutants ever bands together to save the Earth from eternal darkness.

Retrieved from "https://heykidscomics.fandom.com/wiki/Chaos_War:_X-Men_Vol_1_1?oldid=1733218"
Community content is available under CC-BY-SA unless otherwise noted.