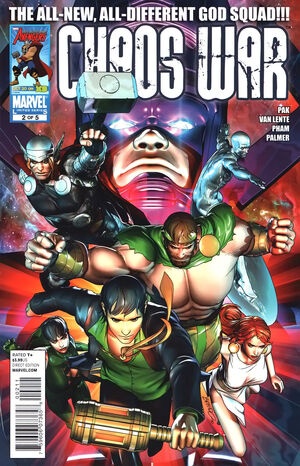 Appearing in "Return of the God Squad"Edit

The premiere event of the fall continues! When the greatest threat the Marvel Universe has ever seen lays waste to reality and brings Earth's mightiest heroes to their knees, who you gonna call? That's right: the all-new, all-different, all-divine GOD SQUAD! The fan-favorite team from SECRET INVASION returns, led by Thor and Hercules. And check out the cosmic heavy-hitters they choose to round out their sacred strikeforce: Galactus, Silver Surfer, Venus, Sersi and Hellstorm! Plus: After the shocking death of a major Marvel character last issue, you'll never believe who the Chaos King has next on his hit list!

Retrieved from "https://heykidscomics.fandom.com/wiki/Chaos_War_Vol_1_2?oldid=1767840"
Community content is available under CC-BY-SA unless otherwise noted.