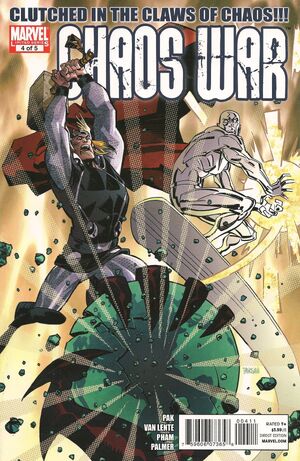 It’s the end of ALL things! The Marvel Universe's shattered pantheons fall from the skies! King Chaos marshals his forces for the final assault with every Marvel hero as his target! Hercules, Thor and the God Squad embark upon one last, mad scheme to save existence itself, but what terrible conflicts wrack the heroes and gods of Earth when Hercules learns the true price of their deliverance? Bonus: Hell comes to Hawaii! (Yes, Hawaii.)

Retrieved from "https://heykidscomics.fandom.com/wiki/Chaos_War_Vol_1_4?oldid=1732790"
Community content is available under CC-BY-SA unless otherwise noted.