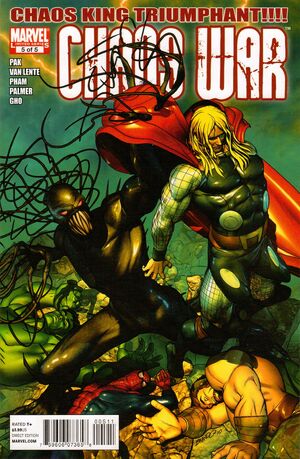 Appearing in "The End is Here"Edit

THIS IS IT!! THE MARVEL UNIVERSE'S LAST STAND! The Chaos King unleashes his ultimate attack against reality as we know it -- and our survival depends on a boy, his god, and their ragtag band of allies: The Mighty Thor! The Incredible Hulks! The Dead (and Living?) Avengers! The X-Men! Alpha Flight! But are they enough to stand against THE ANTI-ETERNITY ... The force that seeks to negate all existence itself? In this issue, the universe dies and everyone wins! …What?

Retrieved from "https://heykidscomics.fandom.com/wiki/Chaos_War_Vol_1_5?oldid=1753970"
Community content is available under CC-BY-SA unless otherwise noted.