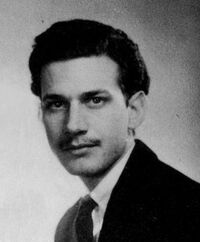 Paris was born in 1911, and moved to New York in 1934.[1] In Spring 1941, Paris met Jack Lehti, and soon after began work inking and lettering Lehti's Crimson Avenger in the pages of Detective Comics.[1] From there, Paris started work in the DC 'bullpen', inking characters such as Airwave, and later working on Vigilante and Johnny Quick, among other characters.[1]

He with Bob Kane on the 1943-46 Batman and Robin newspaper strip, inking most of its run.[1] When that strip ended, Paris was employed by DC Comics as an inker on a number of Batman comic stories and covers, predominantly inking the work of Sheldon Moldoff and Dick Sprang.[1] Despite working on Moldoff's pencils for a number of years, the pair never met, Moldoff recalling "The field was very competitive, and you rarely hobnobbed with people, because there was always somebody waiting for your job."[2] During Paris' run on the book the character Batmite was introduced.[2] In addition to his inking work, Paris penciled two issues of the Batman title - #42 and #46.

Paris's last regular assignment from DC was inking the self-titled Metamorpho comic book, for which he inked 15 of the 17 issues between July 1965 and December 1967.[3]

Outside of the comics field, during the late 1940s and early 1950s, "Paris produced a variety of artwork... including Western genre paintings."[1]

Retrieved from "https://heykidscomics.fandom.com/wiki/Charles_Paris?oldid=287372"
Community content is available under CC-BY-SA unless otherwise noted.