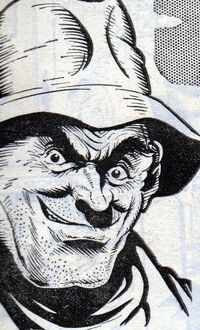 Charlie Peace was a cunning but frequently unlucky thief who operated in Victorian England until he was acccidentally transported through time to London in the 1960's. There, he continued his criminal career. He eventually returned to his own time period.

According to one account, Peace returned to the 2oth Century and, when various other individuals like himself who had led unusual lives began being rounded up by the Government, went into hiding under the alias of antique dealer Charles Love. He later participated in a mission to free his fellow 'characters' (including the The Steel Claw and Tim Kelly) from a remote Scottish prison.

Retrieved from "https://heykidscomics.fandom.com/wiki/Charlie_Peace?oldid=688140"
Community content is available under CC-BY-SA unless otherwise noted.