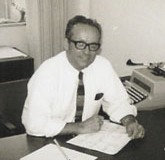 Chase Craig (October 29, 1910 – December 2, 2001) was an American writer-cartoonist who worked on comic strips and comic books. From the mid-1940s to mid-1970s he was an editor and scripter for Western Publishing.

Born in Ennis, Texas, Craig studied in 1933-34 at the Chicago Academy of Fine Arts and then worked at The Christian Science Monitor in Boston, where he drew Little Chauncey. Relocating to Hollywood in 1935, he was employed as an animator for Leon Schlesinger and Walter Lantz in the 1930s, followed by work on comic strips, including Hollywood Hams (for the Los Angeles Daily News) and Mortimer Snerd and Charlie McCarthy. With Fred Fox, he did the Odd Bodkins comic strip for Esquire Features (1941–42). He drew the Bugs Bunny comic strip for the first six weeks in 1942.

He signed on with the Navy in 1942, and during World War II, he worked as a training manual illustrator at Hollywood's Vine Street Pier. Craig married Mary Jane Green in 1943.

Chase was born in Texas and moved to Los Angeles in the thirties to get into the animation business. His fellow Texan, Tex Avery, gave him a job in the story unit at Warner Brothers, where he worked for some time without—for some reason—ever getting a screen credit. After a few years, he decided to turn his attention to print cartooning and left... only to be quickly tapped by Western Printing and Lithography to write and draw stories for its first Bugs Bunny comics. Chase produced over half of the first issue of Looney Tunes and Merrie Melodies comics, issued under the Dell label, including the authorship of the Mary Jane & Sniffles strip. (Sniffles the Mouse had been a character in the cartoons, but Chase came up with the format for this long-running strip, naming the character of Mary Jane after his then-recent bride.) Western soon hired him as an editor and, through the mid-seventies, he worked out of their Los Angeles office, editing (at one point) a comic per day, at a time when it was not uncommon for one of their comics to sell over a million copies. He was the editor who kept Carl Barks producing Donald Duck and Uncle Scrooge stories, and Paul Murry doing Mickey Mouse and so many others. For Dell's Disney titles, he also scripted such characters as the Little Bad Wolf, Brer Rabbit, Bongo and José Carioca. Craig was the editor of Dell/Western's Disney titles, including Walt Disney's Comics and Stories, Uncle Scrooge and Chip 'n' Dale.

In the 1960s, he was the Gold Key editor on Tarzan, Magnus Robot Fighter and Korak, Son of Tarzan. In the late 1970s, he was writer for Marvel's Hanna-Barbera titles.

A resident of Westlake Village, he died December 2, 2001, at Los Robles Regional Medical Center of complications after surgery.

Retrieved from "https://heykidscomics.fandom.com/wiki/Chase_Craig?oldid=157255"
Community content is available under CC-BY-SA unless otherwise noted.