Part of the 'Invasion!' event 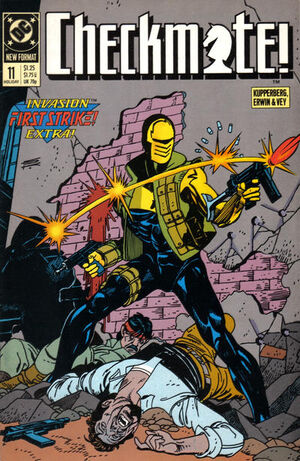 I've never particularly enjoyed this aspect of my work... but I find it difficult to feel remorse for cold-blooded monsters who believed their cause placed them above the law.

Appearing in "God Save the Queen"Edit

Synopsis for "God Save the Queen"Edit

In London, the House of Commons is deciding what to do about the recent Invasion! when they are interrupted and taken hostage by a group of terrorists formerly of the IRA who have aligned themselves with the Alien Alliance. It is the belief of these men, calling themselves Free Earthmen for the Alien Alliance that by abetting their invaders they will receive preferential treatment, and be able to gain their freedom from English tyranny. They are sympathizers believing the Dominators are some sort of social messiah. It is entirely up to Checkmate's Knight Sir Lionel Hawkins to infiltrate the House of Commons and neutralize the terrorist threat before there is any further loss of life. His mission is a complete success.

After returning to his safehouse and receiving orders from superior Scott, Hawkins' mission is to track down the rest of the group and stop them at all costs. Spending an afternoon on detective work and tracking down leads, he finally discovers arms shipments and traces them back to a hideout... where he bursts in, and takes down every single insurgent before they can raise their weapons. They had been planning to assassinate the Queen, and his interference foils the conspiracy. For rescuing her majesty, Hawkins and Scott are both invited to the very same celebration where the murder was to take place.

The last surviving members of the Free Earthmen are still intent on going through with their plans. Feeling paranoid that some security measures aren't perfectly in place, Hawkins returns to his costume and ambushes the final three assassins before they can go through with it. He survives a close-quarters gunfight to knock all of them out, but is shot in the back by a fourth one. Shortly before Lionel will be executed with a headshot by the terrorist simply for revenge, Scott shoots the man instead and saves his life. Hurt and bleeding on the ground, Hawkins seems to be fine... and he's content knowing that he did his job successfully.

Retrieved from "https://heykidscomics.fandom.com/wiki/Checkmate_Vol_1_11?oldid=1508290"
Community content is available under CC-BY-SA unless otherwise noted.