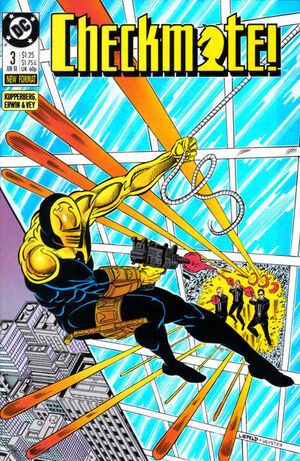 Well, I guarantee they ain't preparin' firecrackers for the Fourth of July!

Appearing in "State of the Union!"Edit

Synopsis for "State of the Union!"Edit

At O'Hare airport, Knight Gary Washington is being pursued by gunmen. Washington fools his pursuers into believing they have killed him, and returns to base. Checkmate learns that the ASP is planning another bombing, but they don't know the target. Washington tracks some of the ASP members to one of their hideouts, where he learns that the bombing target is the Sears tower. He then heads for the Sears tower. In Wyoming, a squad of Knights prepares to attack the ASP command center. As the Knights commence their attack, Washington fights ASP's men at the tower and destroys the detonator.

Retrieved from "https://heykidscomics.fandom.com/wiki/Checkmate_Vol_1_3?oldid=1508302"
Community content is available under CC-BY-SA unless otherwise noted.