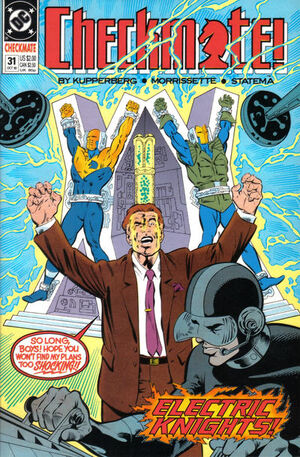 Look, it's no secret that Harvey Bullock's lost control of the operation. He can hardly decide what to have for lunch, much less run Checkmate while Harry Stein's on suspension.

In Tennessee, a costumed man stops a bus, carrying among several innocents, a Knight. The Knight dives out the window and takes cover underneath the bus. Two Knights are being held captive in a facility owned by a man named Victor Cypher. In Washington, Sgt. Steel holds a clandestine meeting with Harry Stein, in which he reinstates Stein as the leader of Checkmate. Back at the bus, the Knight fights his costumed foe and is taken captive. A helicopter carries him off. In New York, a Knight leads a rescue attempt into Victor Cypher's facility. They successfully rescue the two Knights. Elsewhere, the Knight that was captured at the bus, awakes to find his costumed captor seated in a chair, looking at him. The two speak, and the Knight is told that the other man is a member of Soviet intelligence and is trying to recover an item held by Victor Cypher. The Soviet proposes teaming up with the Knight to take down Cypher.

Retrieved from "https://heykidscomics.fandom.com/wiki/Checkmate_Vol_1_31?oldid=1508351"
Community content is available under CC-BY-SA unless otherwise noted.