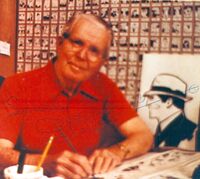 Chester Gould (November 20, 1900 – May 11, 1985) was an American cartoonist, best known as the creator of the Dick Tracy comic strip, which he wrote and drew from 1931 to 1977, incorporating numerous colorful and monstrous villains.

Gould was born and raised in Pawnee, Oklahoma, the son of Alice M. (née Miller) and Gilbert R. Gould, a printer. His grandfather was a preacher from West Virginia. In 1919, his family moved to Stillwater, Oklahoma, where he attended Oklahoma A & M (now Oklahoma State University) and was a member of the Lambda Chi Alpha Fraternity until 1921. That year, he moved to Chicago where he transferred to the Northwestern University School of Continuing Studies. He graduated from Northwestern in 1923. Fascinated by the comics since childhood, Gould quickly found work as a cartoonist. He was hired by William Randolph Hearst's Chicago Evening American, where he produced his first comic strips, Fillum Fables (1924) and The Radio Catts. He also drew a topical strip about Chicago, Why It's a Windy City. Gould married Edna Gauger in 1926, and their daughter, Jean, was born in 1927.

In 1931, Gould was hired as a cartoonist with the Chicago Tribune and introduced Dick Tracy in the newspaper The Detroit Mirror on Sunday, October 4, 1931. The original comic was based after a New York detective that Gould was interested in at the time. The comic then branched to the fictional character that became so famous. He drew the comic strip for the next 46 years from his home in Woodstock, Illinois. Gould's stories were rarely pre-planned, since he preferred to improvise stories as he drew them. While fans praised this approach as producing exciting stories, it sometimes created awkward plot developments that were difficult to resolve. In one notorious case, Gould had Tracy in an inescapable deathtrap with a caisson. When Gould depicted Tracy addressing Gould personally and having the cartoonist magically extract him, publisher Joseph Patterson vetoed the sequence and ordered it redrawn. Late in the period of Gould's control of it, the Tracy strip was widely criticized as too right-wing in character, and as excessively supportive of the police. This commentary argued that Gould was using the strip to push his own political agenda such as attacking the rights of the accused at the expense of storytelling. Additionally, the late 1950s saw a changing newspaper readership that was perhaps less tolerant of Gould's style.

For instance, Gould introduced an odoriferous, chewing tobacco spitting character, B.O. Plenty, with little significant complaint from readers in the 1940s. However, the 1960s introduction of the crooked lawyer Flyface and his relatives, surrounded by swarming flies, created a negative reader reaction strong enough for papers to drop the strip in large numbers. There was then a dramatic change in the strip's paradigm to feature science fiction plot elements with regular visits to the moon. This led to an increasingly fantastic procession of enemies and stories that largely abandoned the strip's format of urban crime drama. The Apollo 11 moon landing prompted Gould to abandon this phase. Finally, Dick Tracy was beset by the overall trend in newspaper comics away from strips with continuing storylines and toward those whose stories are largely resolved within one series of panels. Gould, his characters and improbable plots were satirized in Al Capp's comic strip Li'l Abner with the Fearless Fosdick sequences (supposedly drawn by "Lester Gooch"); a notable villain was Bomb Face, a gangster whose head was a bomb.

Chester Gould won the National Cartoonists Society's Reuben Award in 1959 and 1977. The Mystery Writers of America honored Gould and his work with a Special Edgar Award in 1980. In 1995, the strip was one of 20 included in the Comic Strip Classics series of commemorative postage stamps and postcards. Dick Tracy: The Art of Chester Gould was an exhibition in Port Chester, New York at the Museum of Cartoon Art from October 4 through November 30, 1978. The exhibition was curated by Bill Crouch, Jr. From 1991 until 2008, the art and artifacts of Gould's career were displayed in the Chester Gould-Dick Tracy Museum which operated from the Woodstock Old Courthouse on the Square. Visitors to the Museum saw original comic strips, correspondence, photographs and much memorabilia, including Gould’s drawing board and chair. In 2000, the Museum received a Superior Achievement Award from the Illinois Association of Museums and in 2001, it was given an Award of Excellence from the Illinois State Historical Society. The museum continues today as a virtual museum online. Gould retired December 25, 1977 and died May 11, 1985 in Woodstock, Illinois of congestive heart failure. Gould is buried in Oakland Cemetery in Woodstock. In 2005, Gould was inducted into the Oklahoma Cartoonists Hall of Fame in Pauls Valley, Oklahoma by Michael Vance. The Oklahoma Cartoonists Collection, created by Vance, is located in the Toy and Action Figure Museum.

In 1983, two years before Gould's death, his only child, Jean Gould O'Connell, recorded extensive interviews with her father, who spoke at length about his early attempts during the 1920s to get syndicated and the birth of Dick Tracy. These interviews became a major source when she wrote his biography, Chester Gould: A Daughter's Biography of the Creator of Dick Tracy, published by McFarland in 2007. A resident of Geneva, Illinois, Jean Gould O’Connell contributed to the Dick Tracy storylines, appeared as a character in the strip and helped create the Chester Gould-Dick Tracy Museum. Her book was an Edgar Award nominee in 2008. The entire run of Dick Tracy is being reprinted in a book series by IDW Publishing. The series began in 2006. The first volume includes the five sample strips that Gould used to sell his strip, followed by over 450 strips showing the series' beginning (from October 1931-May 1933), along with a Gould interview, never previously published, by Max Allan Collins. Thirteen more volumes in this series were published between 2006 and 2010, bringing the continuity to April 1953.

Retrieved from "https://heykidscomics.fandom.com/wiki/Chester_Gould?oldid=149837"
Community content is available under CC-BY-SA unless otherwise noted.