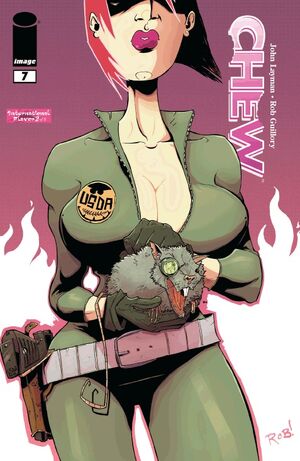 John Colby busts a man selling chicken on the street.  He gets a call from some agents in the arctic who are digging up a frozen, half-naked Russian.[1]

On Yamapalu, Tony Chu debarks from an airplane with his brother, Chow Chu. They see a sign advertising Chow's new show about cooking chicken. Chow is suspicious about why Tony is really there, and Tony pleads it's for personal reasons and his boss doesn't know he's there

A rat with cybernetic enhancements looks over them as they walk through the airport.

Lin Sae Woo watches the video feed from the rat in her hotel room. Lin Sae Woo is one of the most lethal women on the planet having mastered several martial arts. She is on the island as a result of USDA special assignment. She's nervous about the FDA moving in on her case.

At the airport, Chow is attacked by a mob excited to see his show. He smiles and is happy for the fame and Tony becomes jealous. Tony takes a separate Taxi as Chow is carted off with the network of fans.

Upon arriving at Paradise View, Chow is shown his cooking room and informed he won't actually be using chicken for the show. He is shown a strange fruit.

When Tony arrives at the hotel, a strange man calls a Mr. Montero to inform him that Tony has arrived. Tony enters the elevator with Lin. Upon the doors shutting, she knocks out the other guest in the elevator and holds Tony against the wall with her leg. They hold each other at gun point each demanding to know why the other person is there. When Tony tells her he's investigating a fruit unlike anything he's ever tasted,[2] she releases him and laughs. She tells him to meet her in an hour in the lobby and she'll tell him everything, and in return she wants to know everything about his adventure at Gardner-Kvashennaya.[1]

As Tony waits at the bar to meet Lin, a man breaks into Lin's room and throws her out the window from the high-rise hotel. He then walks over to the rat cage and takes a bite into the rat revealing fangs.

Retrieved from "https://heykidscomics.fandom.com/wiki/Chew_Vol_1_7?oldid=1128464"
Community content is available under CC-BY-SA unless otherwise noted.