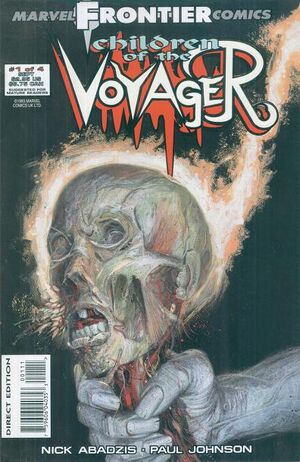 A dream. This is a dream. Tell yourself it's a dream, Sam.

Appearing in "Shadows and Fog"Edit

The premiere issue features an embossed cover with a glow-in-the-dark effect! Children of the Voyager is the first book in Marvel UK's Frontier imprint, introducing the Voyager, an immortal wayfarer who leaves incarnations of himself through time. When one of his children resists returning to him, the Voyager uses any means necessary to change his mind.

Retrieved from "https://heykidscomics.fandom.com/wiki/Children_of_the_Voyager_Vol_1_1?oldid=1419102"
Community content is available under CC-BY-SA unless otherwise noted.