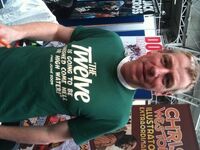 Chris Weston is a British comics artist who has worked both in the US and UK comics industries.

Weston was born in January, 1969 in Rinteln, Germany, and lived in various countries as a child. His career began when he was apprenticed for a year to work with Don Lawrence, by the end of which he had secured paid work on the major British strip Judge Dredd.

He worked with writer John Smith on the ten-part Indigo Prime story, "Killing Time" in which characters battled Jack the Ripper aboard a time travelling train.

Weston's work in America began with on Swamp Thing during Mark Millar's time as scriptwriter. He has since gone on to be published in The Invisibles,[1] Starman, JSA, Lucifer, and The Authority.

He has also worked on The Filth and Ministry of Space. The former a creator-owned written by Grant Morrison, the latter a "what if?" limited series written by Warren Ellis which saw Britain winning the Space Race.[2]

Most recently he has provided the art for Fantastic Four: First Family.

Weston is currently illustrating The Twelve, a twelve-issue limited series written J. Michael Straczynski.[3][4] The series will involve a team formed from Timely Comics characters including The Witness, The Black Widow and Elektro.[5]

Since 2005 Weston has written a number of stories that he has also drawn, including a number of one-offs for 2000 AD and The Twelve: Spearhead a prequel one-shot.[6]

Retrieved from "https://heykidscomics.fandom.com/wiki/Chris_Weston?oldid=1581607"
Community content is available under CC-BY-SA unless otherwise noted.