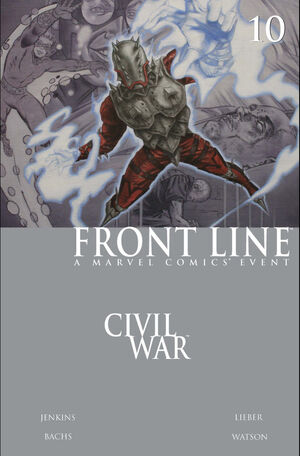 Sally Floyd and Ben Urich realize Tony Stark's role in the Stamford disaster while the traitor in the pro-registration side's ranks is discovered.

Appearing in "The Accused", Part TenEdit


Synopsis for "The Accused", Part TenEdit

Robbie Baldwin comes to a decision and decides to register with the government. With his identity as Speedball already revealed due to the Stamford incident, he decides to create a new identity to represent the pain and suffering he feels he's responible for in Stamford. After burning his old costume, he has a new costume designed, and becomes Penance.

Retrieved from "https://heykidscomics.fandom.com/wiki/Civil_War:_Front_Line_Vol_1_10?oldid=1735746"
Community content is available under CC-BY-SA unless otherwise noted.