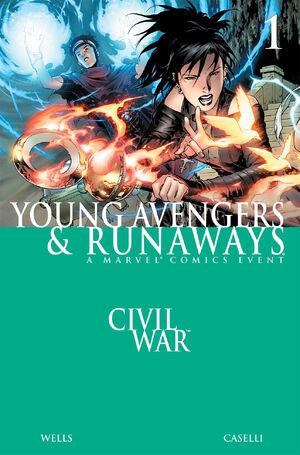 Jeez. We should probably start skipping the "Friends" reruns and watching the news.

The Runaways are at a market that is being guarded by SHIELD agents. The group starts shopping but during their trip, the Flag-Smasher comes in and starts beating up some of the guards. After the Runaways defeat the Flag-Smasher, more SHIELD agents in a helicarrier attack them, but Victor manages to hold them off. SHIELD then uses a certain missile to attack Victor and knock him out. The Runaways grab him and leave. Meanwhile, in New York City, the Young Avengers see the battle between the Runaways and SHIELD and decide to go help them, despite Captain America's veto of the plan. They find Molly, who Chase had just yelled at, outside and try to get her to come with them, but Molly attacks them. The Runaways look and see the Young Avengers with Molly in Patriot's arms. The Vision then appears and touches Victor, which causes them both to get a seizure.

Retrieved from "https://heykidscomics.fandom.com/wiki/Civil_War:_Young_Avengers_and_Runaways_Vol_1_1?oldid=1419158"
Community content is available under CC-BY-SA unless otherwise noted.