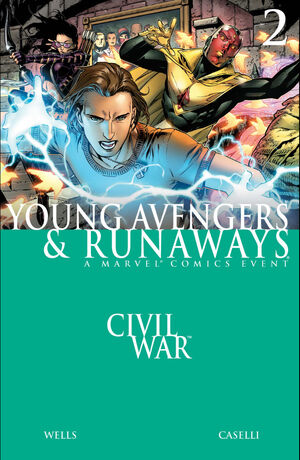 The Runaways and Young Avengers get into a big fight. After a while, Stature manages to pull the Vision away from Victor, who suddenly gets up, and Patriot gets Nico to stop the fighting. The Young Avengers try to get the Runaways to join Cap's team, but they refuse and want to stay out of the war. In the prison known as the Cube, Maria Hill meets with the warden about using one of his agents to apprehend the Runaways, and the Warden suggests Noh-Varr. Molly starts hanging out with Speed, which Chase dislikes, Vision and Victor reveal to each other that they were both made by Ultron, and Hulkling reveals to Xavin that he is half-Kree, half-Skrull, and Xavin realizes that Hulkling is the prophesied savior of his people. Just then, Noh-Varr moves in and snaps Xavin's neck and asks "Who's next?"

Retrieved from "https://heykidscomics.fandom.com/wiki/Civil_War:_Young_Avengers_and_Runaways_Vol_1_2?oldid=1493184"
Community content is available under CC-BY-SA unless otherwise noted.