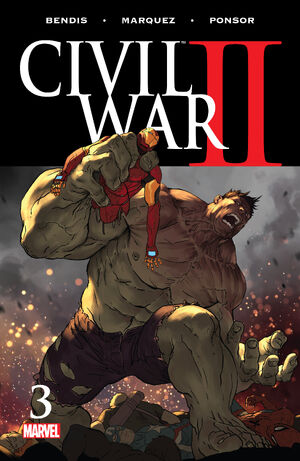 A trial is being held at the Manhattan Federal Courthouse. Prosecutor Matt Murock calls his first witness, Carol Danvers, who's asked to recall the events that transpired on July 19 in Alpine, Utah.

She recalls approaching Bruce Banner at his lab to inquire him about his work, with Banner being baffled by her arrival, considering he hadn't Hulked-out for a year, and then by that of Tony Stark, who asked Banner to step outside of the building. Once outside, Tony, Carol, and Bruce were surrounded by several super-heroes.

Stark is called to the stand as the next witness and continues narrating the events. Outside of his lab, Banner was informed about the Inhuman precog, Ulysses, and his most recent vision, which involved Banner Hulking-out. Bruce began to get nervous, but he was reassured by Stark, stating that he had reached a deal with Danvers, and they required some proof of any potentially dangerous activity before taking action. Beast hacked into Banner's computers and discovered he had been experimenting on himself with dead Gamma cells, causing the heroes to worry, and Maria Hill to try to detain Banner. Bruce began to rant at his peers, but his speech and his life were cut short by a shot from an arrow directly to his head, followed by another to his torso. A tear came out of Banner's eye, and Tony and Carol looked for the shooter. When several heroes approached the tree the shot came from, they found Hawkeye, surrendering himself. Clint was detained by S.H.I.E.L.D. forces, and Captain Marvel demanded to know why had he killed Banner.

When asked the same question in court, Clint reveals that Banner had asked him to take the shot several months ago. They had met at a bar, and Banner had given Clint a special arrow tip to be used if he ever Hulked-out again. When Clint questioned Banner for having chosen him, Banner told him he believed Clint to be one of the few people who would eventually be able to live with the choice.

Murdock questions the authencity of Clint's claims, and Beast is later called to the stand to back up Clint's defense, revealing that an investigation in Banner's lab revealed that the arrow tip used to kill Bruce had been designed by him, and a video confirmed Banner's desire to have Barton take the shot if it was ever needed. Murdock questions if Banner was really going to Hulk-out, and Clint claims he had seen Banner's eye flicker green.

The trial continues to be broadcast through New York, and Carol Danvers is called again to the stand, assuring that lives have been saved and Banner's wishes were granted, even if she didn't know Barton was going to take the shot. Murdock makes inquiries about the Ulysses, and Carol confirms that his abilities have allowed the super-hero community to prevent numerous disasters before they could have happened. Tony later calls out Caro's claims, stating Murdock wasn't asking the right questions.

Back at the scene of Banner's death, Tony reproached Carol while S.H.I.E.L.D. was taking Hawkeye away, blaming her for the tragedy, claiming it happened because she chased it, and sarcastically asked her who was the next person on her hit list. Ulysses and Medusa left the scene, and Tony continued scolding Carol.

The trial reaches its end, and the judge is about to read the verdict.

At Stark's personal lab in Stark Tower, Mary Jane Watson approaches the brooding genius to tell inform him about the trial's conclusion. However, Tony doesn't want to hear it, claiming to already have known what to expect. Friday interrupts MJ's attempt to convince Tony to hear it informing them that she has discovered how Ulysses' powers work.

Retrieved from "https://heykidscomics.fandom.com/wiki/Civil_War_II_Vol_1_3?oldid=1748550"
Community content is available under CC-BY-SA unless otherwise noted.