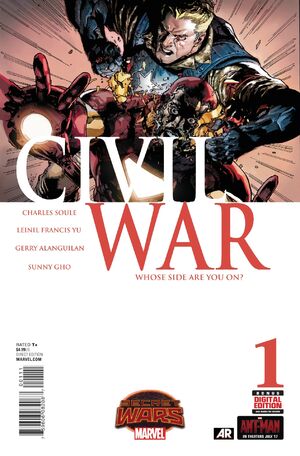 I know there is bad blood on both sides. I know there are detractors on both sides. And yes, I have received death threats over the last six years. But am I afraid at these talks? No. After all... I'll be sitting between the two greatest heroes in the nation.

It began with the unforgettable: the Stamford Incident, an explosion that killed hundreds. The following debate, with the push for the Super-Hero Registration Act, blossomed into the unthinkable: an ideological conflict among the super heroes, polarised into two camps, around the anti-registration Captain America and the pro-registration Iron Man. Everyone else hoped it would just end. But it took another incident to incite the unspeakable...

Captain America had led his team in a mission to liberate the political prisoners being held in Prison 42 in the Negative Zone. Due to spies, Iron Man had mustered his forces in an ambush, bolstering his super heroes with S.H.I.E.L.D. troops and conscripted villains. Meanwhile, Black Panther was hacking the prison's computers, and discovered that the pro-reg forces had activate a self-destruct system, with Iron Man's group supposed to teleport out at the last minute. However, Stark didn't know about the activation of this system, and was informed by Maria Hill that Panther had been who activated the system under Captain America's orders. Deactivating the teleportation device, Black Panther tried to shut down the bomb. Everyone in the prison, pro-reg and anti-reg, rushed to escape through the power of the hero Cloak, who dropped them all in midair in New York.

Unfortunately, Cloak could not shut off his powers fast enough to block out the explosion, which caused a beam of explosive energy to strike the ground in New York, setting off a domino of explosions which toppled buildings, killed super heroes... and left millions dead.

In the aftermath, the surviving heroes regrouped, each side blaming the other for the deaths, and neither willing to accept their part - since they were, after all, good people who fought bad people. Unable to accommodate compromise, they left the nation open to attacks. The Skrull Invasion. The Osborn Insurgency. But no force was able to face un-co-ordinated attacks from two sides at once, and eventually, the two sides were left to settle their differences, eventually splitting the nation down the middle. Everything to the East is now "the Iron", run by Iron Man, and everything to the West is "The Blue", run by Captain America. Differences in politics have caused people to pick one side over the other, with the split ossifying every year.

The only place in the country that embraces both is a community in the ruins of St Louis, built on a bridge over a chasm between the two sides. It is the home of, among others, Miriam Sharpe, a woman who lost her child at Stamford, and who wants to bring peace. She has arranged a meeting between the two sides, and she is being interviewed. The interviewer points out that she is a polarizing figure, having received threats and been compared explicitly to anarchists and terrorists. Miriam responds that her motives are clear and she has hope.

From the east comes President Tony Stark, backed by She-Hulk. From the west comes General Rogers, back by Peter Parker. Greetings are terse, but before going in, Stark offers a goodwill gesture: in his entourage is MJ Parker and her young daughter, and they have come to see Peter for as long as the talks go on.

In the talks, Miriam is able to get the two men open up. Stark explains that the Iron, as the internationally-recognized government, has wealth and resources from trade with the outside world, where the Blue is regarded as a rogue state. However, his citizens are running out of space, while the Blue has twice the space but half the population. He proposes that the Blue shrink, giving his people more space, in exchange for which Stark will make trade concessions. Rogers dismisses the offer, which leads to the start of an old debate between the to men. Rogers accuses Stark of grabbing for power, while Stark says that Rogers is just a general now, defined by his war and reluctant to see it end. As Miriam Sharpe tries to bring peace, she is suddenly shot in the back by a sniper.

Reacting first, Rogers calls Peter Parker to catch the shooter. Leaving his family, Parker finds a remote-controlled sniper rifle. As Miriam dies, Rogers realises that from the angle of the shot, the shooter was most likely aiming at him. Stark denies the shooter is one of his, but it seems that the war is set to reignite, once again demanding that people pick a side...

Retrieved from "https://heykidscomics.fandom.com/wiki/Civil_War_Vol_2_1?oldid=1679160"
Community content is available under CC-BY-SA unless otherwise noted.