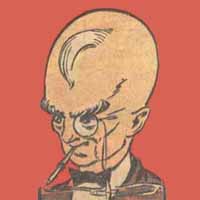 The man known only as the Claw first encountered the Press Guardian through his agent who was impersonating the Ambassador of Lafnia. The Press Guardian defeated the Claw's plot, but never met the man himself until another adventure later, however, his henchmen were all killed.

Still later, the Claw once again turned a man into a man-beast, but this time he had the man-beast hunting for women for an unknown purpose. Once again the Press Guardian defeated the Claw, but his fate remains unrevealed.

Retrieved from "https://heykidscomics.fandom.com/wiki/Claw_(Earth-MLJ)?oldid=1581682"
Community content is available under CC-BY-SA unless otherwise noted.