Start a Wiki
Part of the 'Secret Wars II' event 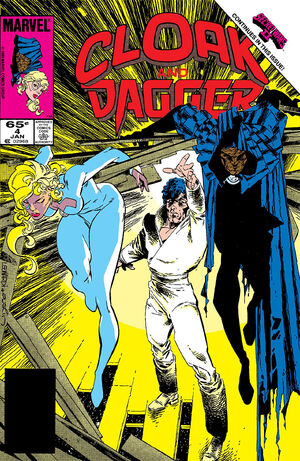 Cloak and Dagger have returned to the Holy Ghost Church where they are once more confronted by Father Delgado. Delgado chastises them for their vigilante tactics, and refuses to believe it when Cloak informs him that a shipment of drugs was smuggled into the city by a religious group. When the argument devolves into a debate about what Father Delgado's god is doing to cure societies ills, Cloak and Dagger are about to leave. Delgado, changes his tone and convinces the two youths to stay, secretly hoping to keep Dagger around long enough to "rescue" her from Cloak's "Satanic" influences over her.

While at the docks, Detective O'Reilly learns from a criminal dock worker that the drugs were smuggled off the Santa Anna in the middle of the night, prompting her to use some brutal tactics to force the information out of him. She is told that the drugs were moved to a warehouse to prepare for distribution and suggests that some of her fellow officers have been bought off. Angered by this, O'Reilly orders a search of all abandoned warehouses in the city, hoping it will keep and potential crooked cops too busy to warn their backers of her search.

Just before dawn, the Beyonder appears in Manhattan's Lower East Side in order to learn more about what makes humans happy. Walking through the slum, he wonders aloud why anyone could live in such degradation. He happens by Cloak and Dagger who are on their nightly patrol. Noting the strangely garbed man, Dagger questions what he could be doing there. Cloak is convinced that the man below could only be looking to do one thing: purchase drugs. As the Beyonder continues his trek he's singled out by some drug dealers outside a house and asked if he wishes to "score". When he asks if they can make him happy, they say that they can and invite them into the slum offering to inject him with Heroin. Unknown to the Beyonder, these goons intend to inject him with a lethal over-dose so that they can rob him of the riches they believe him to possess.

Seeing this, Cloak is sold on the idea that the One From Beyond is looking to by drugs and is no worse than those who are selling the drugs to him. Dagger, however is not quite so convinced but accompanies her partner to investigate further. They arrive, just as the Beyonder is being injected and begin fighting the drug dealers. Unaffected by the massive dose of drugs and upset that Cloak and Dagger had interrupted his attempt to obtaining joy, the Beyonder freezes them in place in a burst of powerful energy. As the crooks flee the scene, the Beyonder asks the two vigilantes for an explanation.

Learning that the two were stopping him from being addicted to drugs and that they are cursed by their powers, the Beyonder then frees them from them. With Tandy and Tyrone back to normal they rejoice and explain to the Beyonder the dangers of drugs. Not understanding, he decides to let the drugs take effect in his system and is hit by a massive hallucination. Feeling the effects of the drug and how dangerous they are, the Beyonder stops their effects and realizes that Cloak and Dagger are an important role in destroying all drug dealers and restores their powers and increases them.

The Beyonder then decides to take a final solution and uses his powers to eliminate anyone who has ever sold or used drugs, killing them all instantly. Horrified by this final solution, both Cloak and Dagger realize that they cannot indiscriminately kill people just because of their involvement with drugs: That sometimes those who are addicted or sell drugs are victims of circumstances and that they should exercise more compassion when facing those with drug problems. When trying to convince the Beyonder this he doesn't listen, and the two attempt to attack him to get him to stop. Realizing what he has done and listening to their explanations, the Beyonder decides to reverse all he has done and leave the two vigilantes to deal with the problem and departs.

With their encounter with the Beyonder over, the two decide that they cannot run from the responsibilities they've charged themselves with and continue to try to make the world a better place.

Retrieved from "https://heykidscomics.fandom.com/wiki/Cloak_and_Dagger_Vol_2_4?oldid=1419233"
Community content is available under CC-BY-SA unless otherwise noted.