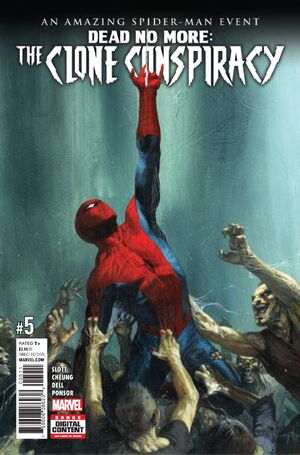 THE SPIDER-EVENT OF THE YEAR CONCLUDES!

• Jackal’s coup de grâce not only sets a host of resurrected villains loose on the unsuspecting streets of San Francisco, but threatens the lives of everyone on Earth!

• After months of waiting, heartache and incredible surprises, THIS is the issue Spider-fans around the world will be talking about for years to come!

Retrieved from "https://heykidscomics.fandom.com/wiki/Clone_Conspiracy_Vol_1_5?oldid=1652423"
Community content is available under CC-BY-SA unless otherwise noted.