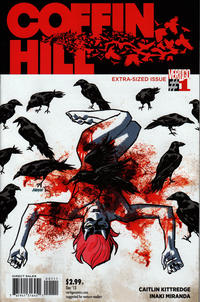 People who touch the darkness die. That's what my grandmother said. But what she didn't know is people who don't just touch it, but embrace it, fall into it. Sometimes those people live.

Appearing in "Forest of the Night"Edit

Synopsis for "Forest of the Night"Edit

After just one month on the job, Eve Coffin has successfully cracked a serial murder case, and though they are happy for her, her fellow BPD officers are a little jealous. The murderer, known as the Ice Fisher, was David Lee Duncan., whom she had arrested during a routine check of an abandoned building. As a mere junior officer, the detectives are surprised by how disinterested she seems in celebrating a career collar like this. Instead of enjoying her party, she just goes home.

At her apartment in Dorchester, Eve finds her acquaintance Sean threatening to kill her roommate with a pistol because he believes she stole 20k in drugs from him. Coolly, Eve tries to negotiate with him, but Sean becomes agitated, and the weapon goes off. Eve is rushed to the hospital with a gunshot wound to the head. As the doctors operate, images from past, present, and future flood her head.

The Coffin family are practically New England royalty, but they are also cursed by madness and murder. Having come out of Salem, the family built the town of Coffin Hill to contain all of the wickedness they brought with them. Just ten years ago, the wickedness of the Coffin family had certainly remained strong in its youngest daughter, Eve. She had a penchant for seeking trouble - but the Coffins always find more than trouble when they look for it.

Two days before Halloween, her family had thrown a party, and her parents were wondering where Eve was. They had intended to be sure that she was locked in her room for the evening, but clearly, neither of them had remembered. To their great displeasure, Eve appeared on the stairs, announcing to the assembled party-goers her intent to shock and amaze them. In fact, her only intention was to embarrass her parents, and after suitably enraging her mother, she escaped the party, and hid away in the family crypt, where she kept a stash of booze.

Eve's grandmother Mercy had been one of the few people who could bring the girl to restrain herself, but Mercy had died, and no one was left to remind Eve that she was more than her last name - that pursuing the dark side of the Coffins wasn't the only way to rebel.

Eve's friends, meanwhile, were growing impatient as they were expecting her to bring them a book of spells in the hopes of raising up the fabled witch of Coffin Hill, who was hanged in the woods long ago. Like the witch, Eve and her family had a reputation that brought them hate throughout the area, and Eve in particular faced a lot of it. Her friend Mel's boyfriend Nate Finn, who had come along, was no different, and his tolerance for Eve on this night - when she declared herself the Coffin Witch - reached its breaking point. Without him, Eve would have only Mel and Dani to help her do some dark magic. As they began to recite the words in the book, they Eve cut her hand, smearing blood across her friends' faces, and declaring that they would pay for this magic in blood.

The next morning, Eve woke naked in the woods and covered in blood. Mel was already awake, eyes wide with horror as she surveyed the pool of blood and the carcasses of dead animals that surrounded them. Dani, though, was gone - gone with the dark things.

Now, Nate is the police chief of Coffin Hill, and a missing persons case has drawn him back into those same woods. Disappearances like this happen every year in Coffin Hill, and every time, it takes him back to that night ten years ago.

Eve, meanwhile, is finally released from the hospital. Her grandmother had told her that anyone who touches the darkness dies. What her grandmother had not known is that people who embrace the darkness fall into it - and sometimes they live. Eve had, and the darkness had changed her. The reporters are still clamouring to get interviews with her about her success in catching the Ice Fisher, but her belligerence and the ongoing internal investigation into her conduct on the night she got shot leads the situation outside the hospital to escalate to the point that Eve's partner Greg is forced to intervene. Annoyed, she warns him that she's not coming back to work - he can't keep fighting for her. As she begins to drive away, he warns that running won't fix anything.

With no job, no money, and nowhere to go that someone won't shove a camera in her face, Eve returns to the only place that could ever claim her - her family's home in Coffin Hill.

Retrieved from "https://heykidscomics.fandom.com/wiki/Coffin_Hill_Vol_1_1?oldid=1680136"
Community content is available under CC-BY-SA unless otherwise noted.