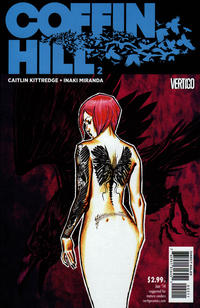 If they're in those woods... They're in more danger than they know.

Appearing in "The Waters and the Wild"Edit

Synopsis for "The Waters and the Wild"Edit

The women of the Coffin family had been witches for generations, ever since Emma Coffin had fled Salem and settled in what became Coffin Hill. Her flight had seen to it that nineteen innocents would die in her place. Eve Coffin is the youngest of Emma's line, and she had left Coffin Hill years ago to become a police officer in Boston. Since taking a bullet to the head recently, though, something had compelled her to return to the family home - Coffin Manor. Emma had built it to resemble her stately English manor. Eventually, the people of Coffin Hill had hanged Emma, as she was turned in by her own daughter. Whatever had kept Emma in Coffin Hill, instead of running again, was still there today. And, some years ago, Eve had made the mistake of setting it free.

Receiving no answer as she enters the great manor, Eve releases a crow that had been trapped inside, and makes her way to the carriage house, taking a set of keys from the rack, and picking out a car for herself. From over her shoulder, a voice warns that the car doesn't belong to her. Startled, Eve turns to find Nate Finn pointing his gun at her.

Eve had had a history with Nate. Officially, he was her friend Mel's boyfriend, but she didn't seem to care much if Eve fooled around with him. On the Halloween night that had changed everything, she had been doing just that when Mel got impatient do get started on their plans for drugs, sex, and magic.

Since then, Nate had become Police Chief of Coffin Hill, and he is not happy to see Eve again now. Grumpily, he warns her to turn off her alarm system next time she comes home after ten years of absence. Rather than talk, he warns that he has more important things to do. Playing on that, Eve produces the missing poster that she found indicating that two teens had disappeared some weeks ago in the same woods that their friend Dani had on Halloween Night. Unmoved, Nate explains that the case is not the same as what happened to Dani. Eve won't believe that they were merely kids who got lost, and demands more information. Coldly, he reminds that he followed the Ice Fisher case, and he knows she's no longer a police officer - which earns her the same response as a civilian would get: no comment. With that, he attempts to drive off, but Eve leaps in front of his car, shooting blocking his view through his windshield in a storm of black feathers.

Annoyed, Nate steps out of his car to talk. Eve explains that if those kids are in the woods, they're in more danger than they think. Nate doesn't want to acknowledge the existence of witchcraft, and warns her that he doesn't want her help in the investigation. Ignoring him, Eve insists that she's getting into his car, and will not leave until she has seen the crime scene for herself, and determined that what happened to Dani and Mel ten years ago is not happening again.

Reluctantly, Nate leads her to the site of the disappearance, commanding her to touch, steal, and burn absolutely nothing. Encountering the victims' parents, Nate warns Eve to keep her mouth shut as they beg to know what happened to their son, and what he intends to do about the girl whom they believe led him astray.

Unbeknownst to Nate, Eve steals his cruiser and heads to the girl's parents' house alone, showing her expired police badge. She soon learns that the the girl's mother, despite being a little trashy, has a flare for mysticism and superstition. Defensively, she claims that Andrew, the missing boy, was not as squeaky clean as he seemed in comparison to her daughter Lacey. She explains that Lacey and Andrew had hung out in a shed behind their house a lot, given that Lacey had become somewhat depressed because of her grandmother's death. Curious, Eve asks whether the grandmother had been a witch, and receives only nervous glances.

As she heads out to the back, Eve muses that she and Lacey couldn't have been more different. She had come from privilege, and abused her parents' generosity. Lacey had, essentially, grown up in a dump. Despite that, both girls have magic in their blood, as evidenced by the blood sign drawn on the floor of the old shed, and the torn and burnt photo of Andrew.

On the night that Dani had disappeared, Eve had made the mistake of thinking the magic she had played with would never turn on her. That night, though, she had watched it do just that. A mess of blood and horror had seen Dani torn away from her, and dragged into darkness.

Returning to the crime scene, Eve earned some negative attention from the other police officers for having stolen their chief's car, but she pushed past them. Angrily Nate warned that she was in some serious trouble, but she spoke over him, revealing that Lacey had been doing dark magic rituals in her barn; a love spell. With his help or not, she would go into the woods and find Lacey, before the forest takes her.

Unwilling to let her go alone, Nate follows, but Eve realizes her decision was a mistake soon after night falls. She can sense that whatever she unleashed ten years ago has grown stronger since. Nate tries to press her on to find the clearing where the incident had first occurred, but Eve warns that they won't get anywhere in the forest until the presence in the woods is ready to let them. As if in answer, a voice calls to Eve, taunting her by claiming that she is alone and without help in the dark woods. Eve follows the voice until she realizes that somewhere underneath her feet lies the body of a woman. Though it isn't Andrew or Lacey, it's someone. With Nate's help, she digs up a skull, and he insists that he call the finding in to the station.

Retrieved from "https://heykidscomics.fandom.com/wiki/Coffin_Hill_Vol_1_2?oldid=1680138"
Community content is available under CC-BY-SA unless otherwise noted.