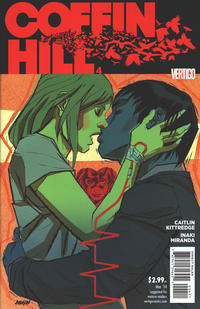 You shouldn't have come back. And if you think you're saving that white trash police chief with this self-righteous stunt, think again.

Appearing in "Death Upon Her Eyes"Edit

Synopsis for "Death Upon Her Eyes"Edit

With Dr. Sheehan dead, Melanie LeFevre is finally off the drugs that were making her zombie-like, and feels more lucid than she has in years. As police chief - and Mel's ex-boyfriend - Nate Finn arrives on the scene, she thanks her old friend and now saviour Eve Coffin for returning to her hometown, waking her up, and sleeping with her boyfriend.

Nate is pleased to see Mel alright, and she is pleased to see him as well. Eve, though, doesn't feel as free of guilt for what happened to Mel as she thought she would. She feels, in fact, like she never woke up from the coma she fell into after taking a bullet to the head.

Thirteen years ago, Eve had visited her friend Danielle Morelli, drunkenly demanding that she sneak out and join she and Nate in the state forest to practice a levitation spell. Dani, though, had a chemistry test to study for, and Mel was out of town for an Academic Decathalon. Annoyed, Eve snuck in through Dani's window, just as Dani's step-father entered the room to tell Dani to look after her sister Bianca while he was out. Eve hid behind the door. After he left, she urged Dani to ditch Bianca and come out to the woods. Sternly, Dani responded that if Eve wanted to hang out with her, she should watch Bianca while she studied, and spend less time trying to steal Mel's boyfriend.

Now, Eve is back at the Morelli house. Bianca went missing the night before, and though she shouldn't be there, she feels the need to ensure that the girl wasn't involved in the same things that got Dani killed. Officer Wilcox explains that Nate took a personal day to watch over Mel. In the meantime, Eve reminds that she found an old art studio down the river some days ago, and wonders if anyone else has looked into it yet. Grumpily, Wilcox agrees to go back with her.

At the studio, Eve explains that the creepy scene before them is actually a protection ritual, rather than devil worship. While she isn't sure whether Bianca is the one who needed protecting, she is sure than no 14-year-old would willingly leave her cellphone behind. Spotting an out-of-place looking bed of flowers across the river, Eve impulsively wades across, and comments that she may be standing on evidence.

Soon Nate and his officers are on the scene, digging up the flower bed to reveal a corpse. Eve hopes that whomever it is isn't someone she knows. Noticing that Eve likely hasn't slept since she got to Coffin Hill, Nate gives her his car keys and sends her home. There, she encounters Mel, who was waiting for her. She drags Eve on a walk, commenting that it is weird that she'd return to Coffin Manor, considering the bad memories and her mother Ellie rolling around in her wheelchair, still haunting the place. Grimly, Eve suggests that Mel cut the shit, as she knows Mel, and she couldn't shake off ten years of muscle atrophy and lithium dosage within a matter of hours.

Mel turns on her, revealing the evil hiding inside her, and reminds that Eve was never a particularly good friend to Mel, always trying to steal away her boyfriend. But, Nate will be hers long after Eve is dead - which will be soon. The Harvest is coming, and Eve will be a part of it. Angrily, Eve punches her in the face, warning that Mel should stay away from her and Nate - because if she doesn't, one of them won't be walking away. Just then, Nate arrives, chiding Mel for taking off when she was still supposed to be under medical supervision. Glaring at Eve, he comments that he should have known she'd have turned into a jealous bitch again. As they walk away, Mel sends a mocking look Eve's way.

Eve returns to the mansion and starts digging through drawers and shelves for pages missing from her old spellbook. Ellie catches her, and demands to know what her daughter is doing back there. She is not welcome. Eve regrets asking for help, and Ellie responds that what's in the book won't help anyone. While they may hate each other, she and Eve's father had tried to protect her from the worst of their duties to the Coffin family. Eve snaps back that the Manson Family is less dysfunctional than the Coffin family, and storms out with the book. Ellie calls out after her that the Coffin legacy is in Eve's blood, and if she thinks she can save Nate with self-righteous stunts, she's wrong. Besides, after what he did to his brother and to Eve, he deserves what's coming to him.

Nate, meanwhile, catches Mel at his sink, and wonders if she's hungry. With her back turned to him, she slices her hand open with a knife, and responds that she could eat, smiling. He kisses her, and she presses her hand to his cheek, slathering her blood across it. As he receives calls from police dispatch, Nate ignores them, peeling off Mel's clothes. Seductively, she comments that nothing will tear them apart again, not her condition, and especially not Eve Coffin.

Retrieved from "https://heykidscomics.fandom.com/wiki/Coffin_Hill_Vol_1_4?oldid=1418365"
Community content is available under CC-BY-SA unless otherwise noted.