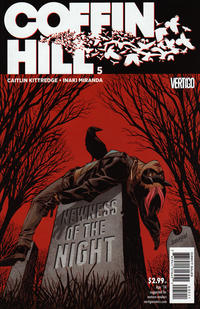 Bianca made a poppet to protect herself from somebody she knew. That same person buried a body not a hundred yards from your back door. Who is she afraid of?

Appearing in "Newness of the Night"Edit

Synopsis for "Newness of the Night"Edit

In the summer of 2003, Eve Coffin and her friends were hanging out in the Coffin Hill Woods, annoyed that Nate Finn had allowed his older brother Patrick to join them there. He was a drug dealer, and with the combined profits from the drugs he'd brought in his duffel bag with the money from their grandmother's trust, he hoped to make enough money to get out of Coffin Hill. When Nate refused to let him take their grandmother's money, Patrick grew angry and attacked him, prompting Eve to come to his defence. Even then, her reputation led Patrick to dare her to cast a hex on him. Instead, she threw his duffel bag into the river, and ran away as he gave chase.

Now, Eve has returned to Coffin Hill after many years away, and when she rescued her friend Mel from an asylum, she failed to anticipate that Mel would become possessed by something evil and seduce Nate, who was once her boyfriend, before she was committed. Though the Coffin family witches had only ever erred on the side of darkness, Eve finds herself compelled to help Nate - though her methods would surely give a good witch pause.

Approaching Nate's house, Eve breaks through the magic barrier Mel placed around it, drawing her attention. Grumpily Mel demands to know whether Eve intends to kill her; to leave a corpse for Nate to wake up to. If so, Eve has changed. Eve responds that she hasn't changed at all - and that should worry Mel. Leaping through Eve's protection spell, Mel warns that the city and Nate are hers, and that the only way to keep them safe from her is to kill her. She knows Eve won't do that, though, because deep down, she is afraid that the real Mel is in there somewhere. As Mel's evil magic constricts around Eve, choking the life from her, a murder of crows swarms around them both, freeing Eve.

Eve admits that she doesn't know whether Mel is still alive, but if this imposter hurts Nate, she will kill her, regardless. Glaring, the evil responds that Eve will be worse off than Mel ever was. As she returns to Nate's front step, she smashes her face into a supporting beam, breaking the skin. When Nate comes to help her, he sees the blood on her face and the blood on Eve's hands, and believes that she was responsible. Giving up, for now, Eve runs away.

Back in 2003, Eve hid in the basement of a nearby cabin, only to have Patrick corner her there, carrying a canister of gasoline. He explained that while he had intended to use it on Mel, later, she will do. He splashes it on her, reminding of what used to happen to witches in the old days. In his mind, she filled Nate's head with ideas that he might be as good as a Coffin, when the truth is that neither of them are any good, and she deserves to burn. As he lights a match, Nate suddenly leaps on him, preventing him from igniting the gasoline, begging Eve to run for it. This on top of their already strained fraternal relationship led to a fist fight, and Nate pinned his brother to the ground, hammering away at Patrick's face. Before he could do much damage, Eve stopped him warning that Patrick isn't worth going to prison over. They'd come up with a story to tell the police.

As they walk the city, Mel comments to Nate that Coffin Hill is obviously dying. Most of the stores on the main drag have closed up shop for both economic and sinister reasons. When one of Nate's officers drives up to warn that he's needed as police chief at the Morellis' house, he correctly assumes that Eve must be involved and excuses himself, failing to notice Mel's seething irritation.

Since her friend Danielle's younger sister Bianca went missing, Eve has been treading over the Morelli family's last nerve. They believe she was responsible for Danielle's death - perhaps correctly - but Eve still feels responsible. She and Officer Wilcox have since returned to the old cabin in the woods where she had nearly been burned to death by Patrick, which happens to be on the Morellis' property. Though Bianca is not there, the wall of the basement is plastered with ids and mementos of missing teens from Coffin Hill. Unfortunately, none of them are down there either. They are interrupted by Gina Morelli and her husband, warning that they want Eve off of their property. Eve responds that if she could take Danielle's place, she would, but in the meantime, Bianca might still be alive, and no matter how much they hate her, they can help make sure that they don't have to bury two daughters by helping her.

Nate arrives in time to see Eve explaining that Bianca left a poppet to protect herself from somebody she knew, and that same person buried a body less than 100 yards from Gina's back door. If they could tell Eve whom Bianca might have been afraid of, she might be able to make some progress. Gina breaks down, warning that she can't go through this process with Eve. Ignoring her, Eve explains that the other missing girl, Lacey, was also a witch. Angrily, Dani's father warns that they should all leave before they upset Gina further, reminding that they had already dug up half of his riverbank extracting a shrink-wrapped corpse. This catches Officer Wilcox's attention, because the police had withheld the fact that the corpse they found had been wrapped in plastic. He should not know that. When Nate suggests that this makes him a suspect, Mr. Morelli makes a run for it, and Eve gives chase.

She tackles him, and as she wrestles his hands behind his back for handcuffing, he warns that while she isn't the wicked witch of Coffin Hill anymore, she will be again. Annoyed, she thrusts his face into the dirt to shut him up.

Retrieved from "https://heykidscomics.fandom.com/wiki/Coffin_Hill_Vol_1_5?oldid=1418366"
Community content is available under CC-BY-SA unless otherwise noted.