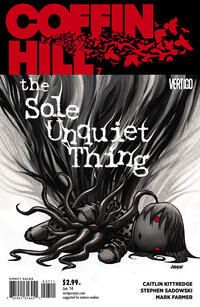 Appearing in "The Sole Unquiet Thing"Edit

Synopsis for "The Sole Unquiet Thing"Edit

In 1958, Eleanor Coffin is a girl, and she still believes in the magic of her bloodline. She ventures out into the woods and calls upon the Coffin Witch to help her. She had hoped that the witch's magic could help set her world to rights; to help her mother. Instead, she is met by the walking corpse of her father, who had been an abusive drunk.

Before things had gone wrong, Ellie's parents had hired a nanny for her named Moira, whose instability was hidden behind a facade of beauty and education. When she held Ellie down and burned her, the girl had lied, knowing her father wouldn't believe her. As time went on, her father began an affair with Moira, and Ellie watched as her mother did nothing about it but watch. One night, he had led Moira out into the woods, and when he returned, it was clear to Ellie that he had murdered the nanny.

As Ellie runs from her father, she spots a gleaming light from within the wood, and upon reaching it discovers a young blonde girl waiting there. She guides Ellie to a hiding spot within the hollow of a tree, and with a snap of her fingers, an array of candles catches flame and illuminates everything. Amazed, Ellie wonders if this is the Coffin Witch, but the girl denies it, introducing herself as Evelyn. The blonde girl asks why Ellie's mother isn't helping her, and Ellie confesses that her mother is being questioned by the police for the murder of her father.

Evelyn admits that her own mother killed people before. She had forced Evelyn to kill her pet rabbit to fuel a spell, and she feels guilty for it to this day. Sympathetically, Ellie offers Evelyn her doll Sammy, commenting that while the doll hasn't protected her from dark things recently, it used to, and it might for her new friend.

A sudden sound signals that Ellie's father is approaching, and the candles all snuff out at once. Evelyn asks why Ellie's mother had killed him, and Ellie raises her hand to reveal a bandage, explaining that her father had hurt her. The police hadn't believed her mother's story that he had been forced to kill him in self defence, so his body is being exhumed for an investigation. From outside, Ellie hears her father warn that she can't mask her scent with the smell from a dead girl. Confused, Ellie asks what he means, and Evelyn admits that she has been dead for some time - she is, after all, a Coffin woman, and most Coffin women seem to die before their time - though nothing stays dead in these woods.

Ellie's father yanks her from her hiding spot, claiming that she can help him. She exclaims that she has nothing to give him, but he responds that he doesn't want anything from her. He wants to give her something: her birthright. As a Coffin, she belongs to the line of witches, and now that her father is dead, it passes to her. Her mother had tried to protect her, but with her power, Ellie can make sure she is who people need protection from. Evelyn appears next to them and warns that this man is no longer Ellie's father. Angrily, the corpse comments that Evelyn turned her back to the Coffin Witch, traitorously. Evelyn remarks that she turned her back on her mother, who was a murderer and cruel.

Ellie recalls how her mother had been very strict about her. She had never been allowed dessert if she couldn't clear her plate. She was always made to look prim and proper. But at every turn, her father had undermined that, slipping Ellie candies when her mother's back was turned.

One month ago, Ellie's father had approached her with a knife, explaining that he intended only to help her. The pain would be for her benefit. Ellie had run away, and sought protection behind her mother, who pointed a pistol at her husband and warned him away. She warned that he would not get hold of the girl. Raising his hands, he reminded that she was not a real Coffin - he needed to use Ellie, or else everyone would suffer when the witch claimed its due. Desperately, Ellie's mother fired off a shot, explaining that she had played along with the Harvest for his sake. When she saw him murder Moira, she realized that he wasn't merely trying to protect Ellie - he was feeding the spirit in the woods. And she knows that it is feeding on him too. Their daughter would not be a sacrifice tonight.

Dropping the knife, Gerard Coffin fell to his knees explaining that he only hoped to spare Ellie a scenario just like this in her adulthood. The harvest had not been for him. It is the process by which the Coffin witches gain power - but it takes so much. He tried to stop it. While she had thought he was having affairs, he was actually away seeking ways to stop the harvest, but he found no solution. There, he begged his wife to kill him, as it would be for the best. In that moment, she could see that he was no longer her husband. He had been consumed by the spirit in the woods. Without hesitation, she shot him through the head and warned her daughter to run.

Now, the spirit within her father's corpse explains that Gerard Coffin had known the power it could give him. He had given himself over easily for it. Evelyn warns her friend to steel herself against these cloying attempts. Her mother had succumbed to it and done evil things. The spirit responds that it can give Ellie the power she wants - the power to ensure that nobody can hurt her again. All that is required to give it to her is blood. Torn between the spirit and Evelyn's warnings, Ellie announces that she just wants to go home.

The spirit responds that some day, Ellie's mother won't be there to protect her, and she'll need the power to protect herself. Besides, Ellie had really come to find the Coffin Witch - to find the power to defeat fear. Though Ellie knows that every word he speaks is true, she grabs Evelyn's hand and runs away. After saying goodbye to Evelyn, Ellie returned to Coffin House. That night, Ellie had learned that magic couldn't solve her problems. Surely, some day, the Coffin Witch would come for her - but not on this day.

Retrieved from "https://heykidscomics.fandom.com/wiki/Coffin_Hill_Vol_1_7?oldid=1418368"
Community content is available under CC-BY-SA unless otherwise noted.