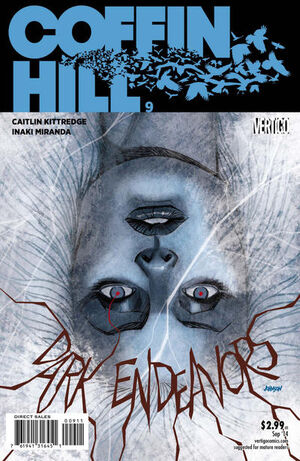 After her friend Lacey stole her sister's locket from her, Bianca Morelli punished her by locking her in a dark room within Coffin House. Lacey has been in there for hours, begging to be let out, but it is only then that she realizes she's not alone.

In December of 2012, in Boston, Eve Coffin made a risky decision to steal the blood sample the Ice Fisher killer task force had collected. While the killer had eluded them, and would continue to elude them so long as they used typical police methods, Eve knew that she could catch him if she did away with her life as a police officer and returned to her roots as a witch. The killer had been baiting Detectives Donovan and Frost with clues laced with black magic, knowing they would never really understand them. Eve took this personally. Using the stolen sample, she cast a spell to scry the killer's location.

Eve returned to her colleagues, getting Doyle out of the room by handing him the evidence, claiming it must have fallen out of his coat, relieved, he insisted on delivering to the state police personally. She then turned to Greg Frost, lying that a CI had told her of a man who might be the killer in the Roxbury area. Greg was skeptical that she had a CI at all, let alone that the claim could be trusted, but Eve insisted.

Against his better judgment, he accompanied her to an abandoned building in Roxbury, warning that whoever is living there can't be the killer. Eve responded that she knows he cares about the girls who are getting killed, and he cares about catching their killer. As they searched the building nervously, Greg noticed with suspicion that it was snowing indoors, just as Eve caught a glimpse of a man running past them. Chasing him out into the street, the snow began blowing harder, obscuring their vision. Eve managed to get a hand on the runner's collar, but he managed to knock her unconscious.

Now, in Coffin Hill, Nate Finn is drowning his sorrows in alcohol. The bartender is amazed by his ability to knock them back, but unconcerned - flirtatious, even. She reminds him that they went to highschool together, and expresses her condolences for his ex girlfriend Mel. Nate is unmoved, but even so, he ends up making out with her in the bathroom, only to be interrupted by his older brother Patrick.

Eight days before Christmas of 2012, Eve had breakfast with Doyle at a diner, and he warned her that the piece of cloth she tore from his sweater won't help the case as he spiked his own coffee. He wondered if she might be able to arrange a meet between him and her CI, and of course, she had to refuse. Both of their phones began ringing at once. Doyle's was to warn that the sixth victim had been found. Eve's was Frost, asking her to meet him at the Boston University campus alone. He didn't care that the body had been found. He had information on how she was caught in the first place.

At Nate's house, Patrick tries to force Nate to let him stay by blackmailing him with the story of how Nate nearly bashed his head in for Eve Coffin's sake. As a hero cop, that story would surely damage Nate's reputation. Nate reminds that he did say that he would kill his brother if he ever came back to Coffin Hill. Patrick doubts his resolve, admitting that he isn't even there for Nate - he has business with someone else.

Eve knew Greg didn't believe half the things she'd told him, but for some reason her trusted her all the same. Later, she would come to think that doing so would be the biggest mistake of his life. When she arrived on campus, he explained that he knew how the killer managed to dump one body and pick up another in the space of half a day. Greg took her into the security office to show her some security footage revealing that he had got buzzed into the dormitory. He hadn't even changed his clothes before making his way inside and abducting Lisa Ware. Because the dorms were locked at night, with no ins or outs from non-students except for campus security and police, this left both Greg and Eve with the unsettling realization that the Ice Fisher killer was a cop.

Retrieved from "https://heykidscomics.fandom.com/wiki/Coffin_Hill_Vol_1_9?oldid=1418370"
Community content is available under CC-BY-SA unless otherwise noted.