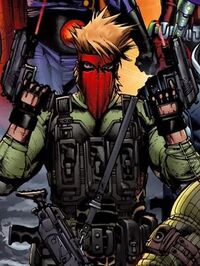 There are various accounts of Cole's early youth: his father died while he was still young and Cole and his brother Max were raised by their mother and stepfather, with his mother dying when Cole was already an adult. However, his mother died while he was still young and he and his brother were raised by their father.[1] It is certain though, that Cole left his family while still a teenager and turned to crime to survive. Despite being a criminal, Cole had his own code of honor and stopped one of his partners in crime from shooting at the police. Cole was arrested and offered a second chance. He was enlisted by International Operations and turned out to be a gifted marksman and an excellent soldier.

Cole Cash's natural talent for combat landed him in black ops, taking the dirtiest jobs as part of a squad known as Team 7 (which also included John "Topkick" Lynch, Marc "Backlash" Slayton, Jackson "Arclight" Dane, Philip "Bulleteer" Chang, Stephen "Wraparound" Callahan, Alex "Slaphammer" Fairchild and Michael "Deathblow" Cray). Cash's codename during these operations was Deadeye. The group was deliberately exposed to an experimental chemical called the Gen Factor, which activated a variety of psi powers in them (in Deathblow's case, this did not happen until twenty years later), but which also detrimentally affected their sense of morality and mental health. After the experiment the survivors were classified as Gen 12. Some of their teammates went mad or committed suicide. Cole suspected that in fact their own superiors, I.O., were behind the experiment, while their superiors claimed that it was an unknown chemical weapon. One of the many missions Team 7 performed was destroying the dictatorship of a small African country. Andrew Johnson, one of the members, went mad and gloried in his ability to make people commit suicide. Disgusted, Cole killed Johnson. Cole grew more and more disgruntled with I.O.'s manipulations and secrecy and rebelled against team-leader John Lynch. Cash took charge and united the team's mental powers against a nuclear weapon that I.O. team-leader Miles Craven fired at Team 7 as a test. Team 7 went into hiding, but was eventually forced to return to I.O.

When the powers of many of Team 7's members started to wane, Craven became interested in their children, the Gen 13, who should have inherited their fathers' powers. Most of the team went into hiding again, while others stayed with I.O. The team finally fell apart and Cole went to work as an assassin for I.O., but he soon became disenchanted with them too. He went freelance, and it was during this period of his life he encountered the ancient Kherubim warrior Zealot. They fell in love, and she took the unprecedented measure of teaching him, a male, the ways of the Coda, the warrior order she had once belonged to. Her Coda-teachings stabilized Cole's sanity and locked away what remained of his psionic powers.

Some time later Cole and Zealot broke up; for Zealot it was just another relationship, but Cole had become devoted to her, being eternally grateful to her for restoring his sanity. However they remained on good terms, and both were recruited to become part of Lord Emp's Daemonite hunting team, the WildC.A.T.s. Grifter would later quit the team when they had to ally with Hightower, a Daemonite who had killed Grifter's friend Lonely. He rejoined when the team came back from Khera, even being the team's leader for some time. During this time Max Cash, his younger brother, was killed, came back as a zombie and was killed again by Grifter himself. He left the team again after Zealot's apparent death. At this point most of his teammates left as well and the WildC.A.T.s were disbanded.

Months later, Cole rejoined the Wildcats, a small group that included Lord Emp, Spartan and the French weapons dealer known as Noir. After Emp's ascension, Grifter sank into a depression; he began drinking and having one-night stands with women who reminded him of Zealot. Finally Zealot herself returned, but at the time Grifter was too drunk to recognize her. After a night of sex, Zealot left him before Grifter realized who she was. He caught up with her again while she was fighting the Coda. Zealot told him that the Coda had betrayed her teachings and she had sworn to wipe them all out. She added that she would spare Grifter, despite being Coda-trained, because of their history. After this meeting, Grifter straightened out his life and joined Jack Marlowe's (Spartan) Halo Corporation.

During this time Cole was mind-controlled by the villain Tao into shooting his former teammate and current I.O. director, John Lynch, leaving him in a coma. Tao then erased Cole's memories of these events.[2]

During a mission for Jack Marlowe, Cole's legs were shattered by Agent Orange. Therefore he could no longer operate as Marlowe's field agent. He trained accountant Edwin Dolby (Grifter II) to take his place. Dolby turned out to be unsuitable for the violent life that Grifter planned for him and resigned from Halo. After Marlowe apologized to him, he rejoined, but strictly as an accountant. Grifter remodeled the robotic body of former teammate Ladytron as a remote-controlled body for himself.

Several months later, Grifter's legs were healed, a side-effect of the dormant Gen-factor according to I.O. scientists. John Lynch, who had woken from his coma, restored Cole's memory. Cole was sent to take down Tao and working together with double-agent Holden Carver, Tao's organization was completely dismantled and Tao was imprisoned.

Since then he had joined a make-shift team of former Wildcats to take down the assassin Nemesis.[3]

When Jack Marlowe died Cole took control of Halo Corporation and all its assets. Being depressed by Spartan's death, Cole went to South America, fighting Daemonites for a month.

He later arrived back in New York just in time to witness Captain Atom's arrival and subsequent battle with Majestic. Cash recognized an energy signature in Captain Atom that he'd previously only seen in his deceased teammates Void and Spartan. After consulting with Jeremy Stone, Cole acknowledged that the Void's energy splinted into both of Captain Atom and Nikola Hanssen.

Cole later regrouped the former Wildcats to capture Captain Atom while he faced a fearful Nikola. Cole tried to convince Nikola to accept who she was as a metahuman as she, like any other normal people, was deeply afraid of metahumans. When Captain Atom defeated the Wildcats in Washington, D.C., both Cole and Nikola arrived at the scene in which Cole convinced Nikola to use the Void's power of teleportation. From there Cole (as Grifter) was about to combat Atom but witnessed him being teleported away by the Authority via a shift-door.

While regrouped with the Wildcats, they were confronted by Mister Majestic who then gravelly informed them that killing Captain Atom would caused the destruction of their universe leaving Cole all the more frustrated of the situation and focused more on Nikola's power of the Void. Cole eventually helped Captain Atom in fending off the Authority from killing the misplaced hero, who they believed that killing Atom would save their universe, and was subsequently killed by Apollo and Midnighter: Midnighter buried two throwing stars in Cash's spine, then Apollo incinerated his head.[4]

After Nikola harnessed her powers and remade the universe, Cole, along of many past deceased people such as Deathblow, came back, but with no memories of the events with Nikola, Captain Atom, and the reboot of the universe.[5]

In the wake of the reboot, Cole was shown to be a man who had attempted to change himself, but kept getting sucked back in to the hero lifestyle. He appeared to be an employee of Hadrian as a core member of the new WildCats team that he was assembling.

Cole Cash briefly worked as an assassin for the US government, targeting Islamist terror networks. His latest assignment went awry when his target turned out to be an alien shape-shifter who was being hunted by others of the same race. Zee, as he/she calls itself, has now drawn Grifter and Midnighter into an interstellar conflict involving weaponized giant worms.

Grifter returned to the Wildcats after Armageddon, helping survivors in Los Angeles. He was later summoned by John Lynch and regrouped with Team-7 where he and his teammates learned of Tao's nihilistic threat. After the Halo Building in Los Angeles was destroyed, Grifter had himself and the Wildcats teamed up with Team-7 in stopping Tao. Ultimately their battle ended with Grifter shooting Tao in the head at point-blank range, thus relinquishing his powers from Void, Max Faraday, and Providence.[6]

Grifter was among the many heroes that were notified of the Authority's Carrier's leaving, and Grifter was among the few heroes to leave Earth when he was ordering the panic refugees who were boarding the shift-ship.[7] Grifter, along with his old comrade Deathblow officially joined the "new" Authority and together helped in establishing order among the Carrier's influx of refugees. During the journey, Cole entered into a sexual relationship with Stormwatch member, Flint.[8]

Cole's journey with the Authority led them to discovering a genocidal alien race known as the Karibna and helped in destroying them, and thereafter returning to Earth.