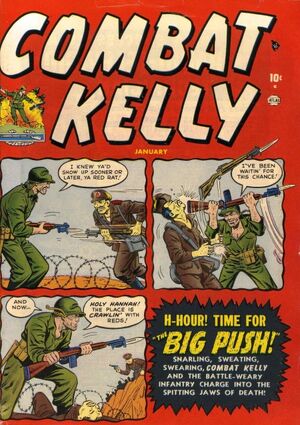 Appearing in "The Big Push!"Edit

Synopsis for "The Big Push!"Edit

In a battlefield east of Chorwon, Combat Casey and Cookie Novak have been pinned in a shell hole for three days and nights under enemy fire. On the fourth night there is a lull in the fighting and just when the pair are about to make a run for it the shelling continues. They are shocked when somebody suddenly dives into their shell hole for cover. At first they think it's a Chinese soldier, but they are shocked to find that it is an American woman, a war photographer named Kitty Klick.

With Chinese soldiers advancing on them, Klick uses the flash bulbs on her camera to blind the enemy attackers long enough for Combat and Cookie to gun them down. In order to make their way through enemy territory, they take some uniforms from the dead Chinese soldiers to disguise themselves. They are spotted by an enemy trooper, who is fooled by their disguises and leads them to a hidden enemy airfield. While Cookie and Combat dispatch the soldier, Kitty takes a photo of the airfield. As they continue to travel through enemy territory, Kitty snaps photos of everything they see along the way, including enemy camps and weapons.

They eventually get back to base, and Kelly is almost shot because he is initially confused for an enemy combatant. They are brought before Major Thorn who is furious that they were out "escorting" a female photographer instead of being on patrol and sends them to the guard house. While the two soldiers stew over their situation, Kitty develops the photos that she took and finds that they are of strategic importance. She brings them to Major Thorn, telling him that both Combat and Cookie helped her get behind enemy lines and take the photos. Shocked, Thorn has Kelly and Cookie released from the guard house and thanks to the photos taken, the American army is able to bomb most of the targets photographed.

Kelly is given an medal for his work and when he meets with Kitty, she is insulted when Combat wants a photo with his medal on instead of a kiss. She shows her displeasure by breaking her camera over his head and storming off.

Appearing in "The Devil Wore Skirts!"Edit

Synopsis for "The Devil Wore Skirts!"Edit

Combat Kelly is upset that he has been put on Prisoner of War Duty, to transport some enemy combatants off base. However he changes his tune when he learns that the prisoners he has to transfer are a bunch of attractive female spies. Combat is completely mollified by the women and flirts with them the entire trip, despite warnings from his driver to not trust the women.

As they pass through a village, one of the spies becomes upset because this was her hometown and begs Combat to stop so she can say goodbye. Completely wrapped around the woman's finger, Kelly orders the driver to stop so they can briefly get out. It's there that the women attack, disarming Kelly and his driver and taking them prisoner. They force them to drive out of the American zone and to a nearby communist camp. Unable to bring themselves to hurt the women, Kelly and his driver comply.

When they arrive at the Chinese camp however, they spring into action attacking the soldiers there and easily overpowering them with their bare hands. They get new guns and they catch the women at a standoff. However, Combat manages to romance one of the women and convinces them to surrender. He them drops them off at the receiving camp, and when the Commanding Officer inquires if there was any trouble, Kelly tells him there was none. The C.O. then points out that Kelly has lipstick on his face, much to Kelly's embarrassment.

Appearing in "Who Goes There?"Edit

Synopsis for "Who Goes There?"Edit

Retrieved from "https://heykidscomics.fandom.com/wiki/Combat_Kelly_Vol_1_2?oldid=1419436"
Community content is available under CC-BY-SA unless otherwise noted.