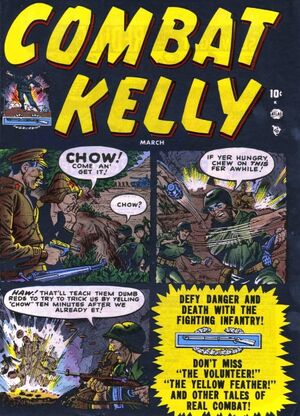 Combat Kelly and Cookie Novak are out on patrol when they come across an enemy tank. Combat jumps onto one of the tanks from the trees and dumps a grenade inside. When the grenade goes off it ignites all the ammo inside the tank. One of the tank drivers survived the blast and tries to eat a rice paper map, but Combat spots him trying and takes it away. They recover the map but cannot read the instructions on it. The dying Chinese soldier shoots Cookie, prompting Combat to mow the enemy soldier down. Checking on his buddy, Combat is relieved to find that Cookie was only grazed with a bullet.

Examining the map further, they decide to check out what is marked in the red triangle drawn on it and sneak deep into enemy lines. They come across a Buddist temple and go inside and decide to rest there. They are awoken by a number of female soldiers who take them prisoner. They soon learn that the women cannot operate the radios to command their troops to defend against American attacks. They are given an ultimatum: assist the women or be hanged. This gives Combat an idea and he tells Cookie to look up swing music on the radio instead.

Shortly after, American forces led by Major Thorn fight their way through the area, smashing through enemy defenses. They soon arrive at the Buddist temple and Thorn is irritated that Combat and Cookie where where to be found. Hearing strange music coming out of the temple, Thorn goes inside and is angered to see the two soldiers dancing with the women to the music. Combat tries to explain that this was the only way they could stall for time before reinforcements arrived.

Combat and Cookie are pinned down in a trench with only a machine gun to protect themselves from an advancing column of communist soldiers. Combat cuts into them, ignoring Cookie's warnings that they need to conserve ammunition. Eventually they run low on ammo, but by that point the Chinese have ceased their attack and have begun waiting out the American troops. When Major Thorn catches Combat Kelly goofing off with his bayonette he assigns Combat and Cookie to go out and see what is keeping their ammunition from reaching the lines.

The pair narrowly escape an enemy sniper and morter launcher. They find the supply road and they are shocked to find a Korean woman standing on the side of the road trying to hitchhike. Just then the ammo trucks come up and they stop for the woman. They watch as she tells the soldiers that there are wounded G.I.'s in the bushes nearby and leads them directly into a trap. The men are captured by Communist soldiers and the ammo truck is taken.

However, when they get close to their lines they find that the Chinese soldiers have launched their attack. In order to save their fellow soldiers, Combat orders them to send all the trucks in without drivers and detonate them, decimating the Chinese soldiers. Major Thorn is furious that Combat has not returned but is shocked when Combat shows up with his prisoner carrying him in her arms.

Appearing in "The Yellow Feather!"Edit

Synopsis for "The Yellow Feather!"Edit

Retrieved from "https://heykidscomics.fandom.com/wiki/Combat_Kelly_Vol_1_3?oldid=1419437"
Community content is available under CC-BY-SA unless otherwise noted.